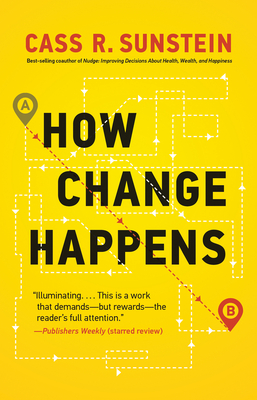 
In Stock—Click for Locations
An “illuminating” book that “puts norms at the center of how we thinking about change”, revealing the different ways social change occurs—for readers of Freakonomics and Thinking, Fast and Slow (The New York Times)

How does social change happen? When do social movements take off? Sexual harassment was once something that women had to endure; now a movement has risen up against it. White nationalist sentiments, on the other hand, were largely kept out of mainstream discourse; now there is no shortage of media outlets for them. In this book, with the help of behavioral economics, psychology, and other fields, Cass Sunstein casts a bright new light on how change happens.

Sunstein focuses on the crucial role of social norms—and on their frequent collapse. When norms lead people to silence themselves, even an unpopular status quo can persist. Then one day, someone challenges the norm—a child who exclaims that the emperor has no clothes; a woman who says “me too.” Sometimes suppressed outrage is unleashed, and long-standing practices fall.

Sometimes change is more gradual, as “nudges” help produce new and different decisions—apps that count calories; texted reminders of deadlines; automatic enrollment in green energy or pension plans. Sunstein explores what kinds of nudges are effective and shows why nudges sometimes give way to bans and mandates. Finally, he considers social divisions, social cascades, and “partyism,” when identification with a political party creates a strong bias against all members of an opposing party—which can both fuel and block social change.
Cass R. Sunstein, Robert Walmsley University Professor at Harvard Law School, was Administrator of the White House Office of Information and Regulatory Affairs in the Obama administration. He was the recipient of the 2018 Holberg Prize, one of the largest annual international research prizes awarded to scholars who have made outstanding contributions to research in the arts and humanities, social science, law, or theology. He is the author of The Cost-Benefit Revolution, How Change Happens (both published by the MIT Press), Nudge: Improving Decisions about Health, Wealth, and Happiness (with Richard H. Thaler), and other books.
“Sunstein’s book is illuminating because it puts norms at the center of how we think about change.”
—David Brooks, The New York Times

“In this dense and technical, but illuminating, work influenced by behavioral science and political philosophy, legal scholar and policy theorist Sunstein (Nudge) further develops his ideas on how changes in attitude and behavior ought to happen . . . This is a work that demands—but rewards—the reader's full attention.”
—Publishers Weekly, starred review