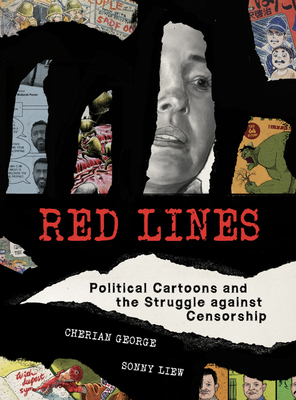 
Not On Our Shelves—Ships in 1-5 Days
A lively graphic narrative reports on censorship of political cartoons around the world, featuring interviews with censored cartoonists from Pittsburgh to Beijing.

Why do the powerful feel so threatened by political cartoons? Cartoons don't tell secrets or move markets. Yet, as Cherian George and Sonny Liew show us in Red Lines, cartoonists have been harassed, trolled, sued, fired, jailed, attacked, and assassinated for their insolence. The robustness of political cartooning--one of the most elemental forms of political speech--says something about the health of democracy. In a lively graphic narrative--illustrated by Liew, himself a prize-winning cartoonist--Red Lines crisscrosses the globe to feel the pulse of a vocation under attack.

A Syrian cartoonist insults the president and has his hands broken by goons. An Indian cartoonist stands up to misogyny and receives rape threats. An Israeli artist finds his antiracist works censored by social media algorithms. And the New York Times, caught in the crossfire of the culture wars, decides to stop publishing editorial cartoons completely. Red Lines studies thin-skinned tyrants, the invisible hand of market censorship, and demands in the name of social justice to rein in the right to offend. It includes interviews with more than sixty cartoonists and insights from art historians, legal scholars, and political scientists--all presented in graphic form. This engaging account makes it clear that cartoon censorship doesn't just matter to cartoonists and their fans. When the red lines are misapplied, all citizens are potential victims.
Cherian George is Professor of Media Studies at Hong Kong Baptist University's School of Communication. A former journalist, he is the author of Hate Spin: The Manufacture of Religious Offense and Its Threat to Democracy (MIT Press). Sonny Liew is a celebrated cartoonist and illustrator and the author of The Art of Charlie Chan Hock Chye, a New York Times bestseller, which received three Eisner Awards and the Singapore Literature Prize.
2022 PROSE Award Finalist, Media and Cultural Studies

"An absorbing read [...] Red Lines is an invaluable almanac for anyone who has been involved in the defence of cartoonists over the last few decades."—Cartoonists Rights Network International

"I would recommend this title to anyone with an interest in political satire."
—Tjeerd Royaards, Cartoon Movement