The Meaning of Proofs: Mathematics as Storytelling (Paperback) 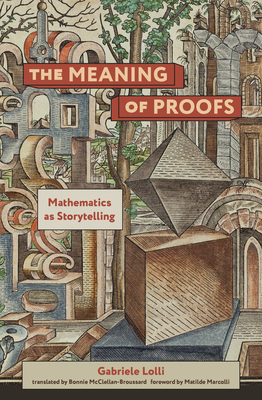 The Meaning of Proofs: Mathematics as Storytelling (Paperback)


On Our Shelves Now at:
Why mathematics is not merely formulaic: an argument that to write a mathematical proof is tantamount to inventing a story.

Every proof is the story of an adventure, writes Lolli, a journey into an unknown land to open a new, connected route; once the road is open, we correct it, expand it. Just as fairy tales offer a narrative structure in which new characters can be inserted into recurring forms of the genre in original ways, in mathematics, each new abstract concept is the protagonist of a different theory supported by the general techniques of mathematical reasoning. In ancient Greece, there was more than an analogy between literature and mathematics, there was direct influence. Euclid’s proofs have roots in poetry and rhetoric. Mathematics, Lolli asserts, is not the mere manipulation of formulas.

Gabriele Lolli was Professor of Mathematical Logic from 1975 to 2008 in the Computer Science Department of the University of Turin and Professor of Philosophy of Mathematics in Scuola Normale Superiore in Pisa from 2008 until his retirement in 2014. He is the author of many books, including Discorso sulla matematica, which proposes a mathematical reading of Italo Calvino’s Six Memos for the Next Millennium.