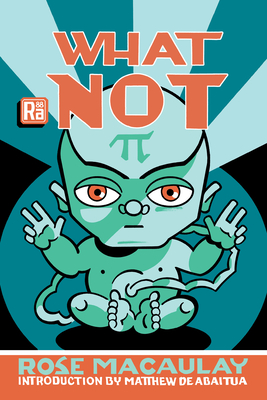 
On Our Shelves Now at:
An early novel by Rose Macaulay about a government program of compulsory selective breeding in a dystopian future England.

In a near-future England, a new government entity—the Ministry of Brains—attempts to stave off idiocracy through a program of compulsory selective breeding. Kitty Grammont, who shares author Rose Macaulay’s own ambivalent attitude, gets involved in the Ministry’s propaganda efforts, which the novel details with an entertaining thoroughness. (The alphabetical caste system dreamed up by Macaulay for her nightmare world would directly influence Aldous Huxley’s 1932 dystopia Brave New World.) But when Kitty falls in love with the Minister for Brains, a man whose genetic shortcomings make a union with her impossible, their illicit affair threatens to topple the government. Because it ridiculed wartime bureaucracy, the planned 1918 publication of What Not was delayed until after the end of World War I.
Rose Macaulay (1881–1958) was an English writer who worked in the British Propaganda Department during the First World War; later, she became a civil servant in the War Office. Several of her satirical novels, including Potterism (1920), Dangerous Ages (1921), and Told by an Idiot (1923) were bestsellers. A journalist, poet, and essayist, and the author of biographies and travelogues, Macaulay is best remembered today for her autobiographical final novel, The Towers of Trebizond (1956).

Matthew De Abaitua is Senior Lecturer in Creative Writing at the University of Essex. His debut science-fiction novel The Red Men was shortlisted for the Arthur C. Clarke Award and adapted into a short film, Dr. Easy. His science fiction novels IF THEN and The Destructives complete the loose trilogy. His book Self & I: A Memoir of Literary Ambition was shortlisted for the New Angle Prize for Literature.