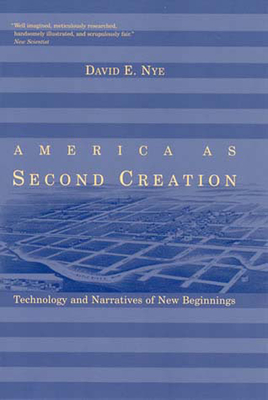 
Special Order—Subject to Availability
An exploration of the dialogue that emerged after 1776 between different visions of what it meant to use new technologies to transform the land.

After 1776, the former American colonies began to reimagine themselves as a unified, self-created community. Technologies had an important role in the resulting national narratives, and a few technologies assumed particular prominence. Among these were the axe, the mill, the canal, the railroad, and the irrigation dam. In this book David Nye explores the stories that clustered around these technologies. In doing so, he rediscovers an American story of origins, with America conceived as a second creation built in harmony with God's first creation.

While mainstream Americans constructed technological foundation stories to explain their place in the New World, however, marginalized groups told other stories of destruction and loss. Native Americans protested the loss of their forests, fishermen resisted the construction of dams, and early environmentalists feared the exhaustionof resources. A water mill could be viewed as the kernel of a new community or as a new way to exploit labor. If passengers comprehended railways as part of a larger narrative about American expansion and progress, many farmers attacked railroad land grants. To explore these contradictions, Nye devotes alternating chapters to narratives of second creation and to narratives of those who rejected it.Nye draws on popular literature, speeches, advertisements, paintings, and many other media to create a history of American foundation stories. He shows how these stories were revised periodically, as social and economic conditions changed, without ever erasing the earlier stories entirely. The image of the isolated frontier family carving a homestead out of the wilderness with an axe persists to this day, alongside later images and narratives. In the book's conclusion, Nye considers the relation between these earlier stories and such later American developments as the conservation movement, narratives of environmental recovery, and the idealization of wilderness.

David E. Nye is Senior Research Fellow at the Charles Babbage Institute and the History of Science and Technology program at the University of Minnesota and Professor Emeritus of American Studies at the University of Southern Denmark. His other books published by the MIT Press include Electrifying America and American Technological Sublime. He was awarded the Leonardo da Vinci Medal in 2005 and was knighted by the Queen of Denmark in 2013.
America as Second Creation is a thought-provoking, readable and vital addition to the literature of American studies.—Richard Haw, American Studies—

Mr. Nye [is] a remarkable chronicler of how technological change has impressed itself on the American character.