The Fourth Enemy: Journalism and Power in the Making of Peronist Argentina, 1930-1955 (Paperback) 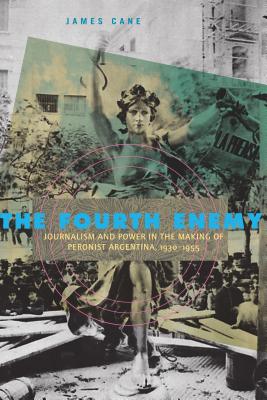 The Fourth Enemy: Journalism and Power in the Making of Peronist Argentina, 1930-1955 (Paperback)

The rise of Juan Per n to power in Argentina in the 1940s is one of the most studied subjects in Argentine history. But no book before this has examined the role the Peronists' struggle with the major commercial newspaper media played in the movement's evolution, or what the resulting transformation of this industry meant for the normative and practical redefinition of the relationships among state, press, and public. In The Fourth Enemy, James Cane traces the violent confrontations, backroom deals, and legal actions that allowed Juan Domingo Per n to convert Latin America's most vibrant commercial newspaper industry into the region's largest state-dominated media empire. An interdisciplinary study drawing from labor history, communication studies, and the history of ideas, this book shows how decades-old conflicts within the newspaper industry helped shape not just the social crises from which Peronism emerged, but the very nature of the Peronist experiment as well.

James Cane is Associate Professor of Latin American History at the University of Oklahoma.