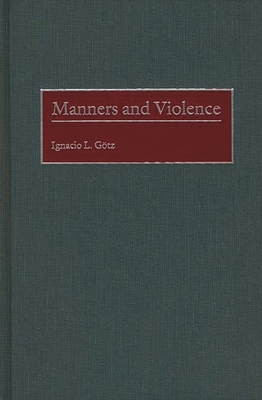 Most contemporary analyses of violence focus on economic, social, and political inequalities as well as on a general malaise. In contrast, G tz claims that violence arises, in part, from a loss of respect for others concomitant with a decline of manners and courtesy. Manners are expressions of respect. Eliminate manners and respect vanishes with them.

The connection between the decline of manners and the increase of violence is documented by reference to a variety of social instances and trends. A special weight is placed upon the failure of schools to instill respect and courtesy in their charges. The schools' failure can be redeemed through a concerted effort to instill manners. A major part of the book, therefore, is devoted to the justification of schooling as an important factor in the re-awakening of respect for others. A provocative analysis for scholars and researchers involved with contemporary social and educational problems.

IGNACIO L. GOTZ is Professor of Philosophy and Teaching Fellow at New College, Hofstra University, where he serves as Coordinator of the Programs in Humanities and Creative Studies./e Before coming to Hofstra he taught for many years in India. His books include The Psychedelic Teacher, Creativity: Theoretical and Socio-Cosmic Reflections, Zen and the Art of Teaching, Conceptions of Happiness, and The Culture of Sexism (Praeger, 1999).