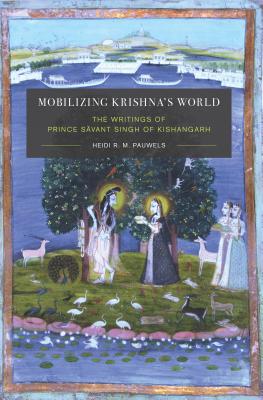 Savant Singh (1694-1764), the Rajput prince of Kishangarh-Rupnagar, is famous for commissioning beautiful works of miniature painting and composing devotional (bhakti) poetry to Krishna under the nom de plume Nagaridas. After his throne was usurped by his younger brother, while Savant Singh was on the road seeking military alliances to regain his kingdom, he composed an autobiographical pilgrimage account, "The Pilgrim's Bliss" (Tirthananda); a hagiographic anthology, "Garland of Anecdotes about Songs" (Pad-Prasang-mala); and a reworking of the story of Rama, "Garland of Rama's Story" (Ram-Carit-Mala).

Through an examination of Savant Singh's life and works, Heidi Pauwels explores the circulation of ideas and culture in the sixteenth through eighteenth centuries in north India, revealing how Singh mobilized soldiers but also used myths, songs, and stories about saints in order to cope with his personal and political crisis. Mobilizing Krishna's World allows us a peek behind the dreamlike paintings and refined poetry to glimpse a world of intrigue involving political and religious reform movements.

Heidi Pauwels is professor of Asian languages and literature at the University of Washington. She is the author of Cultural Exchange in Eighteenth-Century India: Poetry and Paintings from Kishangarh and Goddess as Role Model: Sita and Radha in Scripture and on Screen.