The Coming of the Spirit of Pestilence: Introduced Infectious Diseases and Population Decline Among Northwest Indians, 1774-1874 (Paperback) 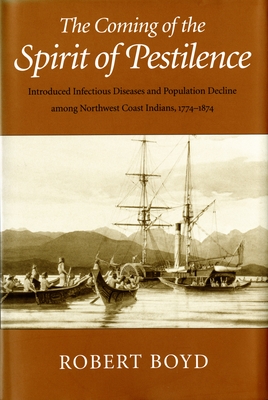 The Coming of the Spirit of Pestilence: Introduced Infectious Diseases and Population Decline Among Northwest Indians, 1774-1874 (Paperback)

In the late 1700s when European colonizers arrived on the Northwest Coast, they reported the presence of vigorous, diverse cultures--Tlingit, Haida, Kwakwaka'wakw (Kwakiutl), Nuu-chah-nulth (Nootka), Coast Salish, and Chinookan--with a population conservatively estimated at more than 180,000. Just a century later the population had plummeted to only 35,000--a devastating loss of Indigenous lives caused by the introduction of diseases brought by settlers and colonizers.

The Coming of the Spirit of Pestilence examines the first century of contact and the effects of introduced diseases such as smallpox, malaria, measles, and influenza on Native American population size, structure, interactions, and viability. Whereas in most parts of the Americas disease transfer and depopulation occurred early and were poorly documented, the later date of Euro-American contact in the Pacific Northwest means that records are relatively complete. Through doctors' records, ships' logs, diaries, censuses, and Native American oral traditions and testimonies, Robert Boyd reconstructs the process of disease transfer and the profound demographic and cultural impact of specific epidemics. This definitive study of introduced diseases in the Pacific Northwest illuminates the magnitude of human suffering and traces connections between these processes and cultural change.

Robert T. Boyd is a research anthropologist at Portland State University and coeditor of Chinookan Peoples of the Lower Columbia.