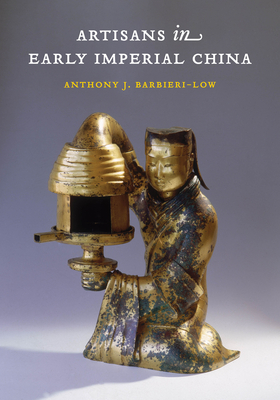 Winner of the 2009 International Convention of Asia Scholars Book Award

Winner of the 2009 Levenson Book Prize (for book on pre-1900 China), sponsored by the Association for Asian Studies

Early China is best known for the dazzling artifacts it has left behind. These terracotta figures, gilt-bronze lamps, and other material remnants of the Chinese past unearthed during archaeological excavations are often viewed without regard to the social context of their creation, yet they were made by real individuals who contributed greatly to the foundations of early Chinese culture. With Artisans in Early Imperial China, Anthony Barbieri-Low combines historical, epigraphic, and archaeological analysis to refocus our gaze from the glittering objects and monuments of China to the men and women who made them.

This book represents the first in-depth social history of artisans in early China. How did they live? How were they trained? How did they market their products? How free were they? In this engaging and illuminating analysis, Barbieri-Low explores these artisans' lives and careers from a variety of aspects. First, he examines their position within early Chinese society, analyzing their social status, social mobility, and role in the early Chinese economy. Delving deeper, he steps into their workshops to learn how they were trained, what tools they used, and what workplace hazards they faced. Following their wares to the marketplace, he investigates some of the marketing techniques used by artisans and merchants, including such startlingly modern practices as family trademarks, rhyming jingles, and knockoffs of royal products.

From the dirt and din of the marketplace, Barbieri-Low enters the rarefied air of the court, with its own visual and material culture and its own professional artisans. This court was constructed upon the backs of yet another class of artisans, the most abject, those found in labor camps and slave markets. These were the men and women who built and decorated many of the great palaces, temples, and tombs of early China. Barbieri-Low compellingly argues that the state used a cold-blooded mathematical formula to optimally exploit these coerced laborers without upsetting the balance of the economy or fostering revolt.

Artisans in Early Imperial China humanizes the material remains of the past, revealing the men and women who made the beautiful artifacts we know today. This book will appeal to anyone interested in Chinese history, as well as to scholars of comparative social history, labor history, and Asian art history.