The Many Lives of Cy Endfield: Film Noir, the Blacklist, and Zulu (Wisconsin Film Studies) (Paperback) 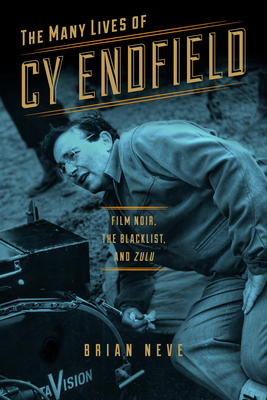 The Many Lives of Cy Endfield: Film Noir, the Blacklist, and Zulu (Wisconsin Film Studies) (Paperback)


Not On Our Shelves—Ships in 1-5 Days
Cy Endfield (1914–1995) was a filmmaker who was also fascinated by the worlds of close-up magic, science, and invention. After directing several distinctive low-budget films in Hollywood, he was blacklisted in 1951 and fled to Britain rather than “name names” before HUAC, the U.S. House of Representatives’ Un-American Activities Committee. The Pennsylvania-born Endfield made films that exhibit an outsider’s eye for his adopted country, including the working-class “trucking” drama Hell Drivers and the cult film Zulu—a war epic as politically nuanced as it is spectacular. Along the way he encountered Orson Welles, collaborated with pioneering animator Ray Harryhausen, published a book of his card magic, and co-invented an early word processor that anticipated today’s technology.
The Many Lives of Cy Endfield is the first book on this fascinating figure. The fruit of years of archival research and personal interviews by Brian Neve, it documents Endfield’s many identities: among them second-generation immigrant, Jew, Communist, and exile. Neve paints detailed scenes not only of the political and personal dramas of the blacklist era, but also of the attempts by Hollywood directors in the postwar 1940s and early 1950s to address social and political controversies of the day. Out of these efforts came two crime melodramas (what would become known as film noir) on inequalities of class and race: The Underworld Story and The Sound of Fury (also known as Try and Get Me!). Neve reveals the complex production and reception histories of Endfield’s films, which the critic Jonathan Rosenbaum saw as reflective of “an uncommon intelligence so radically critical of the world we live in that it’s dangerous.”
The Many Lives of Cy Endfield is at once a revealing biography of an independent, protean figure, an insight into film industry struggles, and a sensitive and informed study of an underappreciated body of work.

“Make[s] a case for [Endfield’s] distinctive voice while tracing the way struggle, opposition, and thwarted ambition both defined his life and became the powerful themes of his best work.”—Cineaste
Brian Neve is an honorary reader in politics and film at the University of Bath. He is the author of Film and Politics in America: A Social Tradition and Elia Kazan: The Cinema of an American Outsider and coeditor of “Un-American” Hollywood: Politics and Film in the Blacklist Era.

“One of the finest studies of an individual film director that I have had the pleasure of reading.”—Paul Buhle, Brown University, coauthor of Radical Hollywood and A Very Dangerous Citizen


“Neve has given us a multifaceted portrait of a complex, talented, and imperfect man who believed his rediscovery came too late. The ‘many lives’ and careers of Cy Endfield tell an uneasy story about survival in the entertainment industry, especially during the tumult of the blacklist and years of exile in Britain.”—Joanna Rapf, editor of Interviews with Sidney Lumet

“The first book dedicated to a varied and underrepresented film director. . . . Any reader interested in the connections among film, politics, and Cold War history would greatly benefit from Neve’s insight and writing, which includes personal interviews with the director himself.”—Book Verdict/Library Journal


“The revelation of the book is . . . the extraordinary variety of Endfield’s accomplishments. Many film directors also find success in TV commercials, but few are also highly respected by fellow magic practitioners as an expert in card tricks, a student of nuclear physics, and indeed a published chess expert. . . . Fascinating nuggety detail.”—Sight & Sound


“A long-overdue examination of a fascinating (if sometimes frustrating) career.”—Leonard Maltin’s Movie Crazy

“This biography is fascinating, given the many individuals and movements in 1930s–1940s theater and politics Endfield brushed up against. His card trickery got him a meeting and a job with illusionist Orson Welles. Endfield taught Shelley Winters movement and planned a live magic and sketch act with young Marilyn Monroe.  But he is primarily interesting as a victim of the moral dilemmas HUAC posed and the blacklist. . . . With this book, the intelligent, inventive Endfield receives the attention and respect due him. Highly recommended. Lower-division undergraduates and above; general readers.”—Choice

“Explores a blacklist victim whose life followed a different path than the better-known Dalton Trumbo.”—Shepherd Express