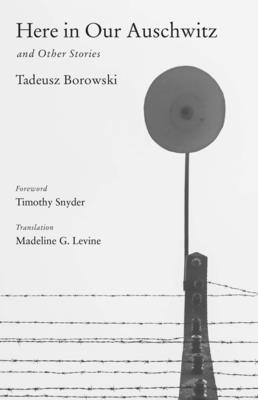 
Not On Our Shelves—Ships in 1-5 Days
The most complete English-language collection of the prose of Tadeusz Borowski, the most challenging chronicler of Auschwitz, with a foreword by Timothy Snyder, author of On Tyranny

"The most important work of the most challenging chronicler of Auschwitz.”—Timothy Snyder, from the foreword

In 1943, the twenty-year-old Polish poet Tadeusz Borowski was arrested and deported to Auschwitz as a political prisoner. What he experienced in the camp left him convinced that no one who survived Auschwitz was innocent.

All were complicit; the camp regime depended on this. Borowski’s tales present the horrors of the camp as reflections of basic human nature and impulse, stripped of the artificial boundaries of culture and custom. Inside the camp, the strongest of the prisoners form uneasy alliances with their captors and one another, watching unflinchingly as the weak scrabble and struggle against their inevitable fate. In the last analysis, suffering is never ennobling and goodness is tantamount to suicide.

Bringing together for the first time in English Borowski’s major writings and many previously uncollected works, this is the most complete collection of stories in a new, authoritative translation, with a substantial foreword by Timothy Snyder that speaks to its enduring relevance.
Tadeusz Borowski (1922–1951), a Polish poet, short story writer, and journalist, was arrested as a political prisoner and deported to German concentration camps. Madeline G. Levine is Kenan Professor of Slavic Literatures Emerita, University of North Carolina–Chapel Hill, and an award-winning translator. Timothy Snyder is the award-winning author of On Tyranny and the Levin Professor of History at Yale University.
“Borowski’s sharp-edged descriptions of life in Nazi concentration camps shatter the limits of even Kafka’s most surreal imaginings . . . conducting a conversation with darkness . . . in an icy style that cloaks hot rage.”—Benjamin Balint, Wall Street Journal

“An excellent new translation . . . For the first time in English, Borowski's better-known Auschwitz stories have been placed in the broader context of his short writing career. Far from diluting the horror of his vision, this juxtaposition intensifies it.”—Katherine Lebow, Times Literary Supplement

“An invaluable collection. . . . Levine’s more comprehensive Borowski, with none of the jagged edges sanded down, will become definitive.”—Dorian Stuber, On the Seawall

“Thanks to Madeline G. Levine’s magnificent translation from the Polish, we have Here in Our Auschwitz and Other Stories by the most important Polish writer of the first half of the 20th century.”—Judges of the 2022 National Translation Awards in Prose and Poetry

Shortlisted for the National Translation Award in Prose, sponsored by The American Literary Translators Association

“Thanks to Madeline Levine's marvelous translation, we now have in English the most important work of the most challenging chronicler of Auschwitz.”—Timothy Snyder, from the foreword