The Posen Library of Jewish Culture and Civilization, Volume 1: Ancient Israel, from Its Beginnings through 332 BCE (Hardcover) 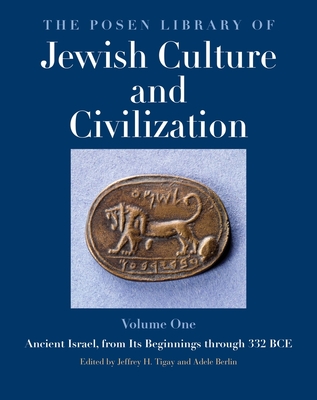 The Posen Library of Jewish Culture and Civilization, Volume 1: Ancient Israel, from Its Beginnings through 332 BCE (Hardcover)


Special Order—Subject to Availability
The Posen Library's groundbreaking anthology series—called "a feast of Jewish culture, in ten volumes" by The Chronicle of Higher Education—offers with Volume 1 an exploration of the culture of ancient Israel, including its literature, legal documents, and visual arts

"Readers seeking primary texts, documents, images, and artifacts constituting Jewish culture and civilization will not be disappointed. More important, they might even be inspired. . . . This set will serve to improve teaching and research in Jewish studies at institutions of higher learning and, at the same time, promote, maintain, and improve understanding of the Jewish population and Judaism in general."—Booklist, Starred Review

The Posen Library of Jewish Culture and Civilization, Volume 1, covers the earliest period of Jewish civilization, from the second millennium BCE through 332 BCE. Organized by genre, this book presents a collection of some of the earliest products of Jewish culture, including extensive selections from the Tanakh and the Hebrew Bible; extrabiblical inscriptions and documents by and about Israelites and Jews, found by archaeologists in the lands of Israel, Egypt, and Mesopotamia; and images representing the visual culture of ancient Israel. Combining genres that have never been presented together in a single publication, Volume 1 illustrates ancient Israel’s cultural innovations and commonalities with neighboring societies.
Jeffrey H. Tigay is Emeritus A. M. Ellis Professor of Hebrew and Semitic Languages and Literatures at the University of Pennsylvania. Adele Berlin is Emerita Robert H. Smith Professor of Biblical Studies at the University of Maryland. Deborah Dash Moore is Frederick G. L. Huetwell Professor of History and Professor of Judaic Studies at the University of Michigan. She is editor in chief of The Posen Library of Jewish Culture and Civilization.
“A thinking person's guide to Jewish culture and civilization that complements nicely epochal approaches in the study of Judaism.”—Zev Garber, Iggeret: Newsletter of the National Association of Professors of Hebrew

“A very nice approach to help readers integrate source material. Folks do not always realize how traditions and convictions have evolved over the centuries.”—Jack M. Sasson, Vanderbilt University