North of America: Loyalists, Indigenous Nations, and the Borders of the Long American Revolution (Hardcover) 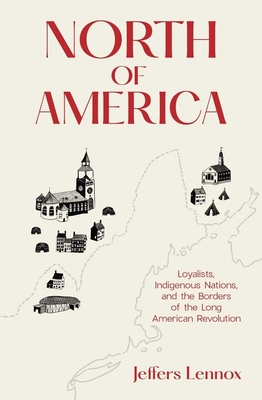 North of America: Loyalists, Indigenous Nations, and the Borders of the Long American Revolution (Hardcover)


On Our Shelves Now at:
How the United States was created—a complex and surprising story of patriots, Indigenous peoples, loyalists, visionaries and scoundrels

The story of the Thirteen Colonies’ struggle for independence from Britain is well known to every American schoolchild. But at the start of the Revolutionary War, there were more than thirteen British colonies in North America. Patriots were surrounded by Indigenous homelands and loyal provinces. Independence had its limits.

Upper Canada, Lower Canada, New Brunswick, Nova Scotia, Newfoundland, and especially the homelands that straddled colonial borders, were far less foreign to the men and women who established the United States than Canada is to those who live here now. These northern neighbors were far from inactive during the Revolution. The participation of the loyal British provinces and Indigenous nations that largely rejected the Revolution—as antagonists, opponents, or bystanders—shaped the progress of the conflict and influenced the American nation’s early development.

In this book, historian Jeffers Lennox looks north, as so many Americans at that time did, and describes how Loyalists and Indigenous leaders frustrated Patriot ambitions, defended their territory, and acted as midwives to the birth of the United States while restricting and redirecting its continental aspirations.
Jeffers Lennox is an associate professor of history at Wesleyan University and author of Homelands and Empires: Indigenous Spaces, Imperial Fictions, and Competition for Territory in Northeastern North America, 1690–1763.
“Elegantly constructed, persuasively argued, and engagingly written, North of America will be recognized as an important and original contribution to American Revolutionary history.”—Peter S. Onuf, coauthor of “Most Blessed of the Patriarchs”: Thomas Jefferson and the Empire of the Imagination

“Studded with surprises, this important book shows how Canada shaped the early United States—sometimes as a friend, more often as a foe or foil. Lennox is an expert storyteller.”—Caitlin Fitz, author of Our Sister Republics

“Jeffers Lennox makes a significant contribution to the general understanding of how the thirteen colonies achieved independence and national definition.”—Richard D. Brown, author of Self-Evident Truths

“North of America is much needed integration of the role and relationship of Canada to the United States in both the American Revolution and the period of the Early Republic. The book represents an important contribution to both the continental and imperial perspective of early American history.”—Andrew O’Shaughnessy, author of The Men Who Lost America