In Praise of Forgetting: Historical Memory and Its Ironies (Paperback) 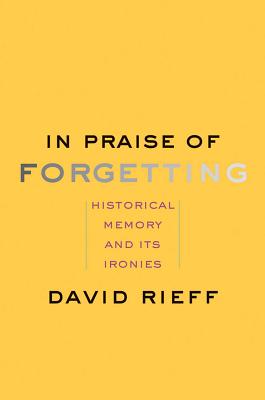 In Praise of Forgetting: Historical Memory and Its Ironies (Paperback)

The conventional wisdom about historical memory is summed up in George Santayana’s celebrated phrase, “Those who cannot remember the past are condemned to repeat it.” Today, the consensus that it is moral to remember, immoral to forget, is nearly absolute. And yet is this right?

David Rieff, an independent writer who has reported on bloody conflicts in Africa, the Balkans, and Central Asia, insists that things are not so simple. He poses hard questions about whether remembrance ever truly has, or indeed ever could, “inoculate” the present against repeating the crimes of the past. He argues that rubbing raw historical wounds—whether self-inflicted or imposed by outside forces—neither remedies injustice nor confers reconciliation. If he is right, then historical memory is not a moral imperative but rather a moral option—sometimes called for, sometimes not. Collective remembrance can be toxic. Sometimes, Rieff concludes, it may be more moral to forget.

Ranging widely across some of the defining conflicts of modern times—the Irish Troubles and the Easter Uprising of 1916, the white settlement of Australia, the American Civil War, the Balkan wars, the Holocaust, and 9/11—Rieff presents a pellucid examination of the uses and abuses of historical memory. His contentious, brilliant, and elegant essay is an indispensable work of moral philosophy.
David Rieff is the author of many books, including, most recently, The Reproach of Hunger: Food, Justice, and Money in the 21st Century. He lives in New York City.
"David Rieff should be read by those in government and others who are bent on harnessing collective memory for the purposes of national commemoration."—Hew Strachan, Times Literary Supplement

". . . an astringent, eloquent and sometimes moving essay on the virtues of forgetting. . . . The prudence, caution and moderation of Rieff’s argument is likable, as is his insistence on the need for political judgement in balancing the claims of remembering and forgetting."—Michael Ignatieff, Sunday Times

"Rieff makes a powerful case for reconciliation and compromise, and exposes how politicized our nationalist histories are. Lucidly deploying historical examples and literary references, he himself seems to have forgotten nothing."—Gary J. Bass, New York Times Book Review

"In this slender volume bristling with erudition, Rieff wrestles with one of the most explosive forces of modern times: mythologized historical 'memories' that encourage people to cultivate old grudges and settle historical scores."—Walter Russell Mead, Foreign Affairs

"A journalist who has frequented global hotspots and an analyst of humanitarian policy, . . . Rieff advances his argument in spare prose, with implacable tenacity, and vast knowledge."—Samuel Moyn, The New Republic

"This controversial book is a must-read for anyone concerned with ethics, politics and the human situation today. Drawing on his experience as a war correspondent and bringing to bear an impressive grasp of history, David Rieff explores the role of memory in the defining events of recent times, including the origins and aftermath of war and ethnic cleansing in former Yugoslavia, the malign inheritance of apartheid in South Africa, and the supreme crime of the Holocaust."—John Gray, author of Black Mass: Apocalyptic Religion and the Death of Utopia

"For those who grew up with 'Never again' as the call to justice, David Rieff’s sober and erudite essay shocks with its counterintuitive moral questioning: What exactly is gained—and lost—by remembering? His assessment that paths to peace can be found only if nations and groups find ways to forget the past may be disputed by many, but honest thinkers will agree that we are at the dangerous fulcrum of being both unforgiving and unforgiven."—Susan D. Moeller, author of Shooting War: Photography and the American Experience of Combat and Compassion Fatigue:How the Media Sell Disease, Famine, War and Death