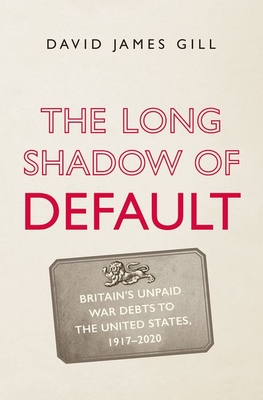 The Long Shadow of Default focuses on an important but neglected example of sovereign default between two of the wealthiest and most powerful democracies in modern history. The United Kingdom accrued considerable financial debts to the United States during and immediately after the First World War. In 1934, the British government unilaterally suspended payment on these debts. This book examines why the United Kingdom was one of the last major powers to default on its war debts to the United States and how these outstanding obligations affected political and economic relations between both governments. The British government’s unpaid debts cast a surprisingly long shadow over policymaking on both sides of the Atlantic. Memories of British default would limit transatlantic cooperation before and after the Second World War, inform Congressional debates about the economic difficulties of the 1970s, and generate legal challenges for both governments up until the 1990s. More than a century later, the United Kingdom’s war debts to the United States remain unpaid and outstanding.

David James Gill provides one of the most detailed historical analyses of any sovereign default. He brings attention to an often-neglected episode in international history to inform, refine, and sometimes challenge the wider study of sovereign default.


David James Gill is a professor in the School of Politics and International Relations at the University of Nottingham. He is the author of Britain and the Bomb and co-author of Divided Allies.
“David Gill’s brilliant, deeply researched and stylish book makes important contributions to the history of both Britain and the United States, to their relations during the Second World War, and to a wider understanding of default. It is a model of what historical analysis brings to our understanding of the modern world.”—Martin Daunton, author of Just Taxes

“Gill provides a fascinating window into the dynamics of bilateral official lending, with a focus on wartime debts between allies. Using a wide range of archival materials, Gill details the domestic and international considerations behind the UK’s servicing of its 1917 debt until 1934, as well as its subsequent (and continuing) suspension of payments.”—Layna Mosley, author of Global Capital and National Governments

“Of debts arising from the Great War, Franklin Roosevelt said, 'default... that word should never be said.' And most often it isn't, especially for the sum Britain has yet to repay the United States. Yet the failure to repay had a long history that affected Anglo-American cooperation in the Second World War, the Cold War, and afterward. A valuable study on the uses of mostly forgetting, if not fully forgiving, debt.”—Eric Rauchway, author of Why the New Deal Matters