Painting in Stone: Architecture and the Poetics of Marble from Antiquity to the Enlightenment (Hardcover) 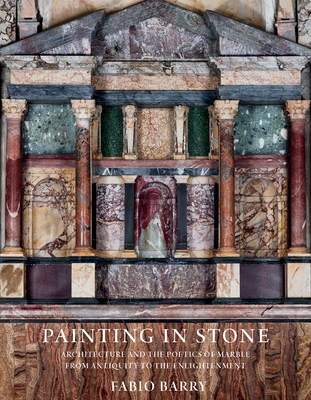 Painting in Stone: Architecture and the Poetics of Marble from Antiquity to the Enlightenment (Hardcover)

Spanning almost five millennia, Painting in Stone tells a new history of premodern architecture through the material of precious stone. Lavishly illustrated examples include the synthetic gems used to simulate Sumerian and Egyptian heavens; the marble temples and mansions of Greece and Rome; the painted palaces and polychrome marble chapels of early modern Italy; and the multimedia revival in 19th-century England. Poetry, the lens for understanding costly marbles as an artistic medium, summoned a spectrum of imaginative associations and responses, from princes and patriarchs to the populace. Three salient themes sustained this “lithic imagination”: marbles as images of their own elemental substance according to premodern concepts of matter and geology; the perceived indwelling of astral light in earthly stones; and the enduring belief that colored marbles exhibited a form of natural—or divine—painting, thanks to their vivacious veining, rainbow palette, and chance images.
Fabio Barry is assistant professor in the Department of Art and Art History at Stanford University.
“One might think that, after the many studies published over the past 50 years about coloured marbles in architecture, there would be no need for a new work on the subject. Painting in Stone by Fabio Barry has made me completely change my mind.”—Dario del Bufalo, The Art Newspaper

“[A] handsome new tome . . . a welcome addition to the study of a material that continues to captivate.”—Benjamin Riley, New Criterion

Winner of the 2021 PROSE award in Architecture and Urban Planning, sponsored by the Association of American Publishers

Apollo Magazine’s Book of the Year

“Painting in Stone is one of the most ambitious, learned, and original books on art and architecture written in recent decades. Barry writes vividly and powerfully, expounding the meaning of marble in architecture in a most engaging way.”—Nicholas Penny, director of the National Gallery, London (2008–15)

“The most original and comprehensive book in architectural history since I don’t know when. A major achievement.”—Robert S. Nelson, Yale University