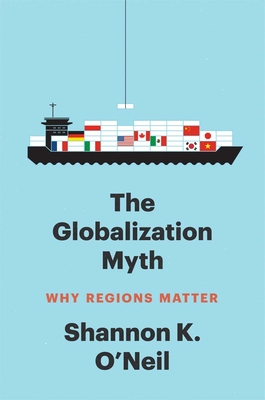 
On Our Shelves Now at:
A case for why regionalization, not globalization, has been the biggest economic trend of the past forty years

The conventional wisdom about globalization is wrong. Over the past forty years as companies, money, ideas, and people went abroad more often than not, they looked regional rather than globally. O’Neil details this transformation and the rise of three major regional hubs in Asia, Europe, and North America. Current technological, demographic, and geopolitical trends look only to deepen these regional ties. O'Neil argues that this has urgent implications for the United States. Regionalization has enhanced economic competitiveness and prosperity in Europe and Asia. It could do the same for the United States, if only it would embrace its neighbors.
Shannon K. O’Neil is the vice president of studies, and Nelson and David Rockefeller Senior Fellow for Latin American Studies, at the Council on Foreign Relations.
“Regionalization is quickly becoming the new globalization. Shannon O’Neil’s The Globalization Myth deftly explains why the key to America’s continued industrial competitiveness lies neither in ‘America alone’ reshoring nor in laissez faire offshoring but in nearshoring. An important corrective to a broken public policy debate.”—Ian Bremmer, President, Eurasia Group


“Shannon O’Neil’s call for ‘more NAFTAs and fewer America Firsts’ is timely, constructive, and pragmatic.  With her deep knowledge of the Americas and of the politics of regional integration, she makes a practical case for an American economic strategy which would work in a world dividing more into blocks.  I urge our elected officials to open their minds to O’Neil’s compelling argument.”— Adam S. Posen, President, Peterson Institute for International Economics


“This is a phenomenal book about regionalization. Global markets are consolidating into three regional hubs. The US needs to act on that, or it will get left behind. I found this a gripping read!”—Ann E. Harrison, University of California, Berkeley