Cairo 1921: Ten Days that Made the Middle East (Hardcover) 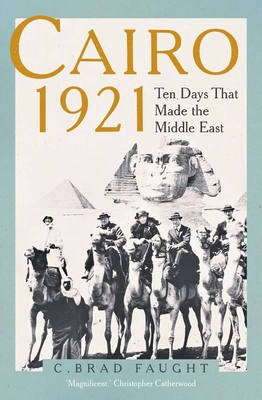 Cairo 1921: Ten Days that Made the Middle East (Hardcover)

Called by Winston Churchill in 1921, the Cairo Conference set out to redraw the map of the Middle East in the wake of the First World War and the collapse of the Ottoman Empire. The summit established the states of Iraq and Jordan as part of the Sherifian Solution and confirmed the establishment of a Jewish homeland in Palestine—the future state of Israel. No other conference had such an enduring impact on the region.

C. Brad Faught demonstrates how the conference, although dominated by the British with limited local participation, was an ambitious, if ultimately unsuccessful, attempt to move the Middle East into the world of modern nationalism. Faught reveals that many officials, including T. E. Lawrence and Gertrude Bell, were driven by the determination for state building in the area to succeed. Their prejudices, combined with their abilities, would profoundly alter the Middle East for decades to come.
C. Brad Faught is professor of history and global studies at Tyndale University. He is the author of seven books, including The Oxford Movement, The New A–Z of Empire, and Kitchener: Hero and Anti-Hero.

“This magnificent book corrects the myths of decades. In a most readable way and based upon serious archival research, Professor Faught shows us the truth of the origins of today's Middle East in comprehensive fashion. I commend it enthusiastically.”—Christopher Catherwood, author of A Brief History of The Middle East

“A brilliant and comprehensive examination of the events, individuals involved and actions taken by Britain under Churchill as Colonial Secretary and his advisors in Cairo in March 1921 while challenged by nascent nationalism and prevailing colonial mindset.”—Michael D. Berdine, author of Redrawing the Middle East

“A refreshingly clear and straightforward account of the 1921 Cairo Conference that largely shaped the Middle East as we know it today.”—David Stafford, author of Oblivion or Glory: 1921 and the Making of Winston Churchill