MI9: A History of the Secret Service for Escape and Evasion in World War Two (Paperback) 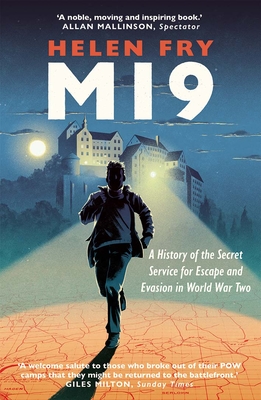 MI9: A History of the Secret Service for Escape and Evasion in World War Two (Paperback)


On Our Shelves Now at:
A thrilling history of MI9—the WWII organization that engineered the escape of Allied forces from behind enemy lines

“A fitting tribute to the hundreds of men and women who risked their lives in assisting Allied escapees.”—Giles Milton, Sunday Times (London)

“A masterful retelling with a fascinating cast of characters straight out of a John le Carré thriller.”—Mark Felton, author of Castle of the Eagles

When Allied fighters were trapped behind enemy lines, one branch of military intelligence helped them escape: MI9. The organization set up clandestine routes that zig-zagged across Nazi-occupied Europe, enabling soldiers and airmen to make their way home. Secret agents and resistance fighters risked their lives and those of their families to hide the men.

Drawing on declassified files and eye-witness testimonies from across Europe and the United States, Helen Fry provides a significant reassessment of MI9’s wartime role. Central to its success were figures such as Airey Neave, Jimmy Langley, Sam Derry, and Mary Lindell—one of only a few women parachuted into enemy territory for MI9. This astonishing account combines escape and evasion tales with the previously untold stories behind the establishment of MI9—and reveals how the organization saved thousands of lives.
Helen Fry is a specialist in the history of British Intelligence. She is the author of The Walls Have Ears, The London Cage, and over twenty books focusing on intelligence and POWs in World War II.
“Fry has undertaken prodigious research…The book is a fitting tribute to the hundreds of men and women who risked their lives in assisting Allied escapees, and a welcome salute to those who broke out of their PoW camps that they might be returned to the battlefront.”—Giles Milton, The Sunday Times

“A finely researched appraisal of MI9, one of the least known agencies of the Second World War, whose principal role was to help British prisoners of war escape from enemy-occupied territory.”—The Sunday Times ‘Best Paperbacks of 2021’


“An enjoyable addition to the historiography. . . . Recommended.”—Choice

Shortlisted for the 2020 Duke of Wellington Medal for Military History

"A masterful page turner you won't be able to put down. The story of MI9 is one of the most inspiring and exciting of all WWII narratives.”—Alex Kershaw, author of Avenue of Spies

'Behind every Allied great escape in WWII there stood the brave and resourceful men and women of MI9, an intelligence organisation today almost completely forgotten … A masterful retelling with a fascinating cast of characters straight out of a John le Carré thriller.' Mark Felton, author of Castle of the Eagles

“Important, informative and engaging. Fry draws an engrossing picture of the commitment and courage of tens of thousands of agents who helped "escapers" and "evaders" in the European Theatre of Operations.’—Michael Jago, author of The Man Who Was George Smiley