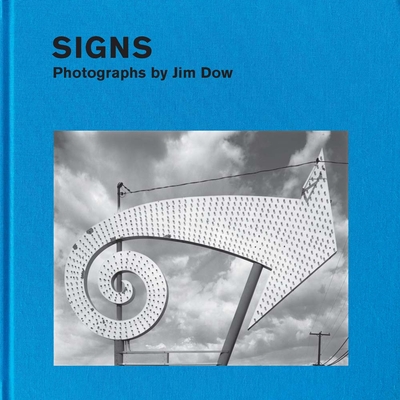 
Not On Our Shelves—Ships in 1-5 Days
Vivid, clear-sighted images of American vernacular signage and architecture encountered along old US highways showcase the early black-and-white work of the acclaimed photographer Jim Dow

The American photographer Jim Dow (b. 1942) is renowned for photographs that depict the built environment—he first gained attention for his panoramic triptychs of baseball stadiums—and for his skill at conveying the “human ingenuity and spirit” that suffuse the spaces. This book is the first to focus on Dow’s early black-and-white pictures, featuring more than 60 photographs made between 1967 and 1977, a majority of which have never before been published. Indebted to the work of Walker Evans, a key mentor of Dow’s, these photographs depict time-worn signage taken from billboards, diners, gas stations, drive-ins, and other small businesses. While still recognizable as icons of commercial Americana, without their context Dow’s signs impart ambiguous messages, often situated between documentation and abstraction. Including a new essay by Dow that reveals his own perspective on the development of the work, Signs suggests how these formative years honed the artist’s sensibility and conceptual approach.
Jim Dow is a photographer. April M. Watson is senior curator in the Department of Photography at The Nelson-Atkins Museum of Art, Kansas City, MO.