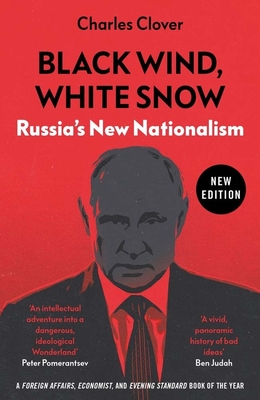 
On Our Shelves Now at:
A fascinating study of the motivations behind the political activities and philosophies of Putin’s government in Russia

“Required reading. This is a vivid, panoramic history of bad ideas, chasing the metastasis of the doctrine known as Eurasianism. . . . Reading Charles Clover will help you understand the world of lies and delusions that is Eurasia.”—Ben Judah, Standpoint

A powerful strain of Russian nationalism now lies at the heart of the Kremlin’s political thinking: "Eurasianism". But how did this dangerous ideology, once a fringe theory, come to dominate Moscow’s elite?

Promoted most notably in recent years by Alexander Dugin, this theory has become the driving force behind the invasion of Ukraine and the perplexing manoeuvrings of Putin’s Russia. In this fascinating investigation, Charles Clover, an award-winning journalist, traces Eurasianism’s origins in the writings of White Russian exiles in 1920s Europe, through Siberia’s Gulag archipelago in the 1950s, the dissolution of the Soviet Union in the early 1990s, and up to its steady infiltration of the governing elite.

Based on extensive research and dozens of interviews with Putin’s close advisers, this eye-opening account is essential reading to understand Russia’s past century – and the dangers of our present political moment.
American journalist Charles Clover is currently the Financial Times’s China correspondent. In 2011 he received the Foreign Reporter of the Year Award at the British Press Awards.
“What did Putin mean by ‘Eurasia’ and where does his project come from? This is the question Charles Clover sets out to answer in this though-provoking book. Part intellectual history, part portrait gallery . . . Black Wind, White Snow traces the background to Putin’s ideas with verve and clarity.”—Geoffrey Hosking, Financial Times

“Clover writes knowledgeably and engagingly of the Russian political scene . . . Readers who would like to make that judgement for themselves in the case of today’s Russia will scarcely find a better introduction than Black Wind, White Snow.”—Edmund Griffiths, Times Literary Supplement

“A veteran Financial Times correspondent analyses what really motivates the regime in Moscow by tracing the rise of Eurasianism: the belief (crudely put) that Russia’s national identity is determined by ethnicity, geography and destiny.”—The Economist, “Books of the Year 2016”

“Black Wind, White Snow is required reading. This is a vivid, panoramic history of bad ideas, chasing the metastasis of the doctrine known as Eurasianism . . . Reading Charles Clover will help you understand the world of lies and delusions that is Eurasia.”—Ben Judah, Standpoint

“An important contribution to this discussion . . . Mr. Clover’s reporting is excellent.”—The Economist

“[A] deeply researched, fascinating account of how nationalist views that were once dissident or marginal in the Soviet Union seeped into the corridors of power in the Kremlin when Marxism-Leninism stopped working . . . Clover’s book deserves to win prizes for originality of mind as well as the strength of his liver—he has spent many nights drinking with these nationalists.”—Michael Burleigh, The Times

“Clover oﬀers a thoughtful and well-contextualized account of a potent form of Russian nationalism.”—Lucien Frary, Terrorism and Political Violence

“Clover’s account of ‘Eurasianism’ in Russia is unlikely to be equaled. . . . Clover’s unusual command of source material and personal interviews integrates his subject into the improvised and obscure style of Putin’s Russia. Highly recommended.”—Zachary Irwin, Library Journal

“Panoramic and vivid. Informative and gripping. This is required reading on Russia now.”—Ben Judah, author of Fragile Empire: How Russia Fell In and Out of Love with Vladimir Putin

“Nationalism—but not as we know it. Part poetic exercise, part proto-fascism, Eurasianism is the old-new idea eating away the Russian soul and spreading throughout Europe. Clover’s book is an intellectual adventure into a dangerous ideological Wonderland.”—Peter Pomerantsev, author of Nothing is True and Everything is Possible: Adventures in Modern Russia