The Black Phalanx: African American Soldiers In The War Of Independence, The War Of 1812, And The Civil War (Paperback) 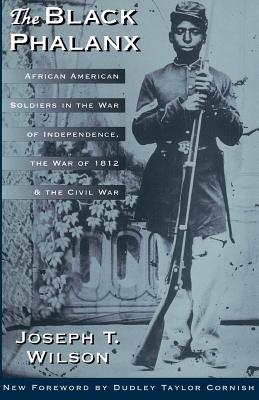 The Black Phalanx: African American Soldiers In The War Of Independence, The War Of 1812, And The Civil War (Paperback)


Not On Our Shelves—Ships in 1-5 Days
This classic includes succinct, compelling accounts of African Americans who fought and died for a freedom they could not enjoy.
Joseph T. Wilson was not only a historian of the fighting black spirit in the Civil War, but was one of its soldiers. His fellow veterans recruited him to write a complete and accurate record of the great struggles for liberty and union borne by African Americans. The result was The Black Phalanx, a book rich in anecdotes, eyewitness accounts, and previously overlooked facts. This classic includes succinct, compelling accounts of African Americans in the Revolutionary War and the War of 1812, men who fought and died for freedom they could not enjoy. The body of the book examines every aspect of black service in the Civil War: the "revolutionary" decision to arm captured black soldiers, and the efforts to recruit troops; the training of black Union regiments; and battles they fought, including the assault on Fort Wagner, the siege of Petersburg, and the fall of Richmond. African Americans spilled blood in every theater of war, from Arkansas to Virginia, and The Black Phalanx is Wilson's spirited history of those soldiers whose valor was denied until it was proven in carnage and victory.
Foreword by Dudley Taylor Cornish

Joseph T. Wilson (1836-1891) participated in the Port Hudson campaign in Louisiana, and was wounded in the grim Battle of Olustee in Florida.