Fifteen Decisive Battles Of The World: From Marathon To Waterloo (Paperback) 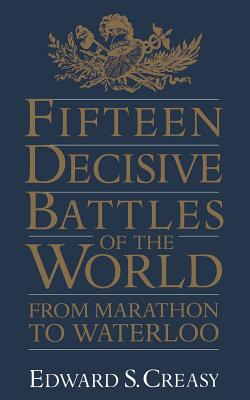 Fifteen Decisive Battles Of The World: From Marathon To Waterloo (Paperback)


Not On Our Shelves—Ships in 1-5 Days
Undoubtedly the most famous work of military history of the nineteenth century, Edward S. Creasy's Fifteen Decisive Battles of the World has been read and re-read for close to 150 years. It is not only the authoritative account of each battle that makes Creasy's work such a classic--it is his command of narrative, his interest in human struggle, his profound deductions as to effects of the battles, and his striving after truth. Furthermore, his selections seem as wise and well-considered today as when Fifteen Decisive Battles first appeared in 1851: Nobody since has made better ones, nor given us better accounts.

Apart from the scholarship and literary skill of Creasy's book, there is another reason it has endured: Creasy was essentially fair-minded. He had been a judge, and when he became England's great military critic and historian, he maintained a thoroughly judicial attitude. He was not a British partisan, nor French, nor German--he was a cosmopolitan observer of great events.
Out of 2300 years, Creasy only found fifteen battles which he called decisive in the highest sense. He chose them not for the number of killed and wounded, nor for their status in myth and lore, but because they fundamentally changed the course of world history. In doing so, he made his book a miniature military history of the western world, a classic that will repay continued study for generations to come, as it has for generations.
Sir Edward Shepherd Creasy (1812-1878) was educated at Eton and Cambridge, and worked as a lawyer and judge until 1840, when he became a professor of history at the University of London. In 1860 he became Chief Justice of Ceylon. After his return to England in 1870, he wrote and published several books, though none received the acclaim of Fifteen Decisive Battles of the World.