The Campaign Of 1812 In Russia (Paperback) 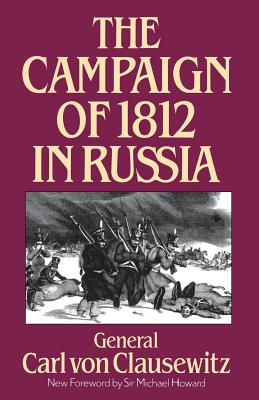 The Campaign Of 1812 In Russia (Paperback)


Not On Our Shelves—Ships in 1-5 Days
"Clausewitz [was], without question, the greatest analyst and student of Napoleon's art of war. . . . Of the numerous accounts of the 1812 campaign . . . few provide greater insight or have contributed more to our understanding of it."--George F. Nafziger, author of Napoleon's Invasion of Russia

On June 23, 1812, Napoleon's Grande Armée, over 500,000 men strong, poured over the Russian border. An equally massive Russian army faced them. The ensuing campaign was a catastrophe for Napoleon. Although the battle of Borodino, which resulted in heavy losses on both sides, allowed Napoleon to enter Moscow, his stay in that empty and decimated city was disastrous. By the time Napoleon had retreated to the Berezina river in late November, his Grande Armée was only a fifth of its original strength. His retreat had become a rout, and his allies began to desert him.

In this book, Clausewitz analyzes all the significant players with sharp and enlightening characterizations, and provides perhaps the best eyewitness accounts of the battle of Borodino and the Convention of Tauroggen. The Campaign of 1812 in Russia is a brilliantly observed study of one of the major turning points of history.
New foreword by Sir Michael Howard

Carl von Clausewitz remains one of history's most important military theorists, recognized primarily for his masterpiece On War. Less well-known, however, is his role as a historian, of which The Campaign of 1812 in Russia is an outstanding example. Clausewitz was appointed a lieutenant colonel by the czar, and played an important part in ensuring Napoleon's ultimate downfall.