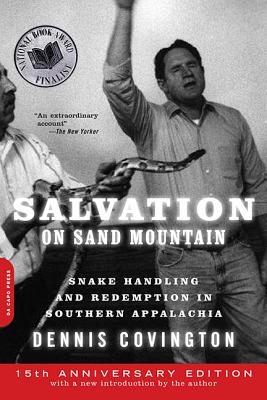 
Not On Our Shelves—Ships in 1-5 Days
A haunting exploration of faith, from a preacher convicted of attempted murder to a first-hand account of holiness serpent handling--"One of the best books on American religion from the last 25 years" (Chicago Tribune)

For New York Times reporter Dennis Covington, what began as a journalistic assignment-covering the trial of an Alabama pastor convicted of attempting to murder his wife with poisonous snakes-would evolve into a headlong plunge into a bizarre, mysterious, and ultimately irresistible world of unshakable faith: the world of holiness snake handling.Set in the heart of Appalachia, Salvation on Sand Mountain is Covington's unsurpassed and chillingly captivating exploration of the nature, power, and extremity of faith-an exploration that gradually turns inward, until Covington finds himself taking up the snakes.
Dennis Covington is the award-winning author of several books of fiction and nonfiction, including Lizard and Lasso the Moon. He teaches creative writing at Texas Tech University in Lubbock, Texas.
"One of the best books on American religion from the last 25 years...Neither a straightforward account of conversion nor a detached observer's report, the book is wildly personal, compassionate but unsentimental, at times outrageously funny, and ambivalent at its core."—Chicago Tribune