Such Men as These: The Story of the Navy Pilots Who Flew the Deadly Skies over Korea (Paperback) 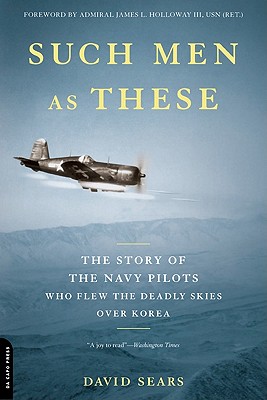 Such Men as These: The Story of the Navy Pilots Who Flew the Deadly Skies over Korea (Paperback)


Not On Our Shelves—Ships in 1-5 Days
In 1951, James Michener went to Korea to report on a little known aspect of America's stalemated war: navy aviators. His research inspired novel about these pilots became an overnight bestseller and, perhaps, the most widely read book ever written about aerial combat.

Using Michener's notes, author David Sears tracked down the actual pilots to tell their riveting, true-life stories. From the icy, windswept decks of aircraft carriers, they penetrated treacherous mountain terrain to strike heavily defended dams, bridges, and tunnels, where well entrenched Communist anti-aircraft gunners waited to shoot them down. Many of these men became air combat legends, and one, Neil Armstrong, the first astronaut to walk on the moon.

Such Men As These brims with action-packed accounts of combat and unforgettable portraits of the pilots whose skill and sacrifice made epic history.
A former US Navy officer and a Vietnam War veteran, David Sears is the author of four previous books, including Such Men as These. He lives in New Jersey.

“A valuable study of the culture and conduct of the naval air war over North Korea…A fitting addition not only to the literature of the Korean War, but also to the literature emerging in this, the centennial year of U.S. naval aviation.”

Collected Miscellany, 7/8/11
“A great tribute to the U.S. Navy pilots who flew in the ‘Forgotten War.'”

Michigan War Studies Review, 5/16/14
“The author has…done a service to both students and veterans of the Korean War…Sears's account poignantly proves that the pilots faced missions as perilous as those of any infantryman. The narrative…places readers in the cockpit, feeling the sensations and stress of aerial combat…Present-day military personnel will find in Such Men As These much that is instructive regarding wartime leadership and the resilience and courage of men fighting a war to which the American public paid little attention.”