A Christmas Far from Home: An Epic Tale of Courage and Survival during the Korean War (Paperback) 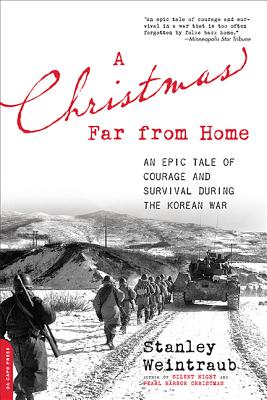 A Christmas Far from Home: An Epic Tale of Courage and Survival during the Korean War (Paperback)


Not On Our Shelves—Ships in 1-5 Days
In the tradition of his Silent Night and Pearl Harbor Christmas, historian Stanley Weintraub presents another gripping narrative of a wartime Christmas season—the epic story of the 1950 holiday season in Korea, when American troops faced extreme cold, a determined enemy, and long odds.

Stanley Weintraub is an award-winning author of notable histories and biographies, including the bestselling books on wartime Christmas seasons Pearl Harbor Christmas and Silent Night. A National Book Award finalist and Guggenheim Fellow, he earned a Bronze Star as a young officer in the Korean War. He lives in Newark, Delaware.
“[Weintraub] portrays MacArthur as ego-driven and politically ambitious; he surrounded himself with yes-men when he would have benefited from those advising caution…The heroes in this account are the troops in the field who endured appalling conditions, maintained discipline, and staved off complete collapse.”

Roanoke Times, 11/2/14
“A story of heroism and cowardice, of brilliant leadership and bungling stupidity, of mud- and snow-slogging endurance on the part of an assortment of troops of many nations, in obedience to a call of duty from a briefly united United Nations, against the tide of North Korean and Chinese Communist forces. And overlaying all, the lash of a brutal and relentless winter campaign in some of the most rugged mountains in Asia…Though primarily of interest to Korea veterans and military history buffs, this modest volume may find favor with a reading public who love brave tales of danger and courage, well-researched and engagingly composed. Perhaps it may also serve as a warning of the perils of unpreparedness, on which far too many Americans seem ready to rely.”

Acadiana LifeStyle, December 2014
“A wonderful tribute to our soldiers who were placed in harm's way by the arrogance of a politically minded general.”

"An authoritative account...[Weintraub's] ability to meld together so many disparate elements...in such a short, swift-moving book is exemplary."—Richmond Times-Dispatch

"Stanley Weintraub's poignant account of the day one of the worst of wars took a holiday sounds like the stuff of fiction, but it was the sort of event that fiction can only imitate. No wonder that his book reads like a novel, a true story that has the power to haunt."—Robert Cowley, founding editor of MHQ: The Quarterly Journal of Military History

"Weintraub has brought an obscure and bizarre incident to life with a flair that gives the reader a detailed glimpse of a unique Christmas story."—Seattle Times

InfoDad.com, 12/11/14
“[Weintraub] gives readers a ‘you are there' feeling for the Christmas season of 1950, five months after the war started…It is a celebration of the common soldier and a condemnation of the know-nothing (or know-little) command structure. Well-written, with a strong sense of place, by an author who, after all, himself served in the conflict.”

USA Today, 12/15/14
“Weintraub does not give readers a joyous holiday tale but he does provide a useful one. It shows the dangers when commanders fail to use intelligence wisely and let hubris get the better of them.”

Minneapolis Star Tribune, 12/14/14
“Weintraub tells this story with the sort of growl toward incompetent command earned by a man who himself served in the trenches…A Christmas Far From Home ultimately warrants its subtitle: It is an epic tale of courage and survival in a war that is too often forgotten by folks back home.”

Norfolk Virinian-Pilot, 12/14/14
“Weintraub, himself a Korea veteran, expertly delineates the unraveling disaster for the trapped, frozen, dispirited men on the ground.”