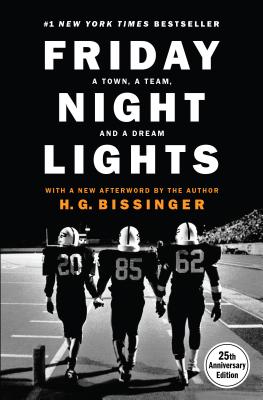 
Not On Our Shelves—Ships in 1-5 Days
Named Sports Illustrated's best football book of all time and a #1 NYT bestseller, this is the classic story of a high school football team whose win-loss record has a profound influence on the town around them.

Return once again to the timeless account of the Permian Panthers of Odessa -- the winningest high-school football team in Texas history. Socially and racially divided, Odessa isn't known to be a place big on dreams, but every Friday night from September to December, when the Panthers play football, dreams can come true.

With frankness and compassion, Pulitzer Prize winner H. G. Bissinger unforgettably captures a season in the life of Odessa and shows how single-minded devotion to the team shapes the community and inspires -- and sometimes shatters -- the teenagers who wear the Panthers' uniforms.

The inspiration for the hit television program and film of the same name, this anniversary edition features a new afterword by the author.
H. G. Bissinger is the Pulitzer Prize-winning author of five books, including the New York Times bestsellers Three Nights in August and Friday Night Lights, the classic that inspired the acclaimed movie and television series. He is a longtime contributing editor for Vanity Fair and has written for the New York Times, the New Republic, the Daily Beast, and many other publications. He divides his time between homes in Philadelphia and the Pacific Northwest.
"Groundbreaking."—Austin American-Statesman

"[An] inspiring story about a small town and it's unbelievable football team. Starring unforgettable characters in a setting you'll never want to leave, this is a must-read for true fans."—Bustle.com

"About more than football. Buzz Bissinger's story about the 1988 Permian High School Panthers football team from Odessa, Texas, is a critical look at the impact of high school football on a football-crazed community. It's not but about 365 pages long...but sometimes, even in the fall and winter, you need a brisk read that's not too heavy."—Arkansas Democrat Gazette