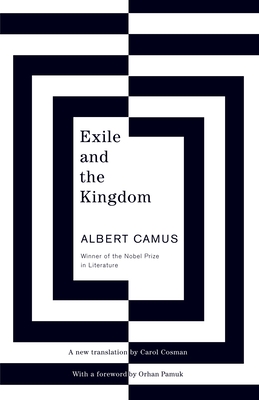 
Special Order—Subject to Availability
From a variety of masterfully rendered perspectives, these six stories depict people at painful odds with the world around them. A wife can only surrender to a desert night by betraying her husband. An artist struggles to honor his own aspirations as well as society's expectations of him. A missionary brutally converted to the worship of a tribal fetish is left with but an echo of his identity. Whether set in North Africa, Paris, or Brazil, the stories in Exile and the Kingdom are probing portraits of spiritual exile, and man’s perpetual search for an inner kingdom in which to be reborn. They display Camus at the height of his powers.

Now, on the 50th anniversary of the book’s publication, Carol Cosman’s new translation recovers a literary treasure for our time.

Albert Camus won the Nobel Prize for Literature in 1957.
Albert Camus was born in Algeria in 1913. He spent the early years of his life in North Africa, where he worked at various jobs—in a weather bureau, in an automobile supply firm, in a shipping company—to help pay for his courses at the University of Algiers. He went on to become a journalist, and from 1935 to 1938 he ran the Theatre de l'Equipe, a theatrical company that produced plays by Malraux, Gide, Synge, Dostoyevsky, and others. During World War II he was one of the leading writers of the French Resistance and editor of Combat, then an important underground newspaper. His fiction, including The Stranger, The Plague, The Fall, and Exile and the Kingdom; his philosophical essays, "The Myth of Sisyphus" and "The Rebel"; and his plays have assured his preeminent position in modern letters. In 1957 Camus was awarded the Nobel Prize for Literature. On January 4, 1960, he was killed in a car accident. Carol Cosman has translated works by Balzac and Simone de Beauvoir from the French as well as JeanPaul Sartre's biography of Flaubert.
“Thoroughly engrossing” —The New York Times“[These stories] invite comparison with his best work” —The Nation