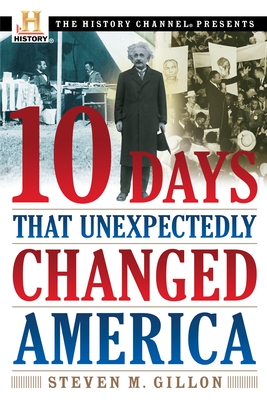 10 Days That Unexpectedly Changed America pinpoints pivotal days that transformed our nation. For the series and the book, The History Channel challenged a panel of leading historians, including author Steven M. Gillon, to come up with some less well-known but historically significant events that triggered change in America. Together, the days they chose tell a story about the great democratic ideals upon which our country was built.

You won’t find July 4, 1776, for instance, or the attack on Fort Sumter that ignited the Civil War, or the day Neil Armstrong set foot on the moon. But January 25, 1787, is here. On that day, the ragtag men of Shays’ Rebellion attacked the federal arsenal in Springfield, Massachusetts, and set the new nation on the path to a strong central government. January 24, 1848, is also on the list. That’s when a carpenter named John Marshall spotted a few glittering flakes of gold in a California riverbed. The discovery profoundly altered the American dream. Here, too, is the day that noted pacifist Albert Einstein unwittingly advocated the creation of the Manhattan Project, thus setting in motion a terrible chain of events.

Re-creating each event with vivid immediacy, accessibility, and historical accuracy, 10 Days That Unexpectedly Changed America comes together as a history of our country, from the first colonists’ contact with Native Americans to the 1960s. It is a snapshot of our country as we were, are, and will be.
Steven M. Gillon is the resident historian of The History Channel and host of HistoryCENTER. Having taught at both Oxford and Yale, he is currently a professor at the University of Oklahoma.