The Armageddon Factor: The Rise of Christian Nationalism in Canada (Paperback) 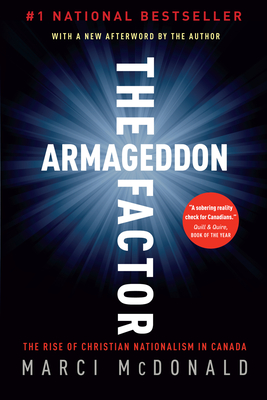 The Armageddon Factor: The Rise of Christian Nationalism in Canada (Paperback)


Special Order—Subject to Availability
In her new book, award-winning journalist Marci McDonald draws back the curtain on the mysterious world of the right-wing Christian nationalist movement in Canada and its many ties to the Conservative government of Stephen Harper.

To most Canadians, the politics of the United States — where fundamentalist Christians wield tremendous power and culture wars split the country — seem too foreign to ever happen here. But The Armageddon Factor shows that the Canadian Christian right — infuriated by the legalization of same-sex marriage and the increasing secularization of society — has been steadily and stealthily building organizations, alliances and contacts that have put them close to the levers of power and put the government of Canada in their debt.

Determined to outlaw homosexuality and abortion, and to restore Canada to what they see as its divinely determined destiny to be a nation ruled by Christian laws and precepts, this group of true believers has moved the country far closer to the American mix of politics and religion than most Canadians would ever believe.

McDonald’s book explores how a web of evangelical far-right Christians have built think-tanks and foundations that play a prominent role in determining policy for the Conservative government of Canada. She shows how Biblical belief has allowed Christians to put dozens of MPs in office and to build a power base across the country, across cultures and even across religions.

“What drives that growing Christian nationalist movement is its adherents’ conviction that the end times foretold in the book of Revelation are at hand,” writes McDonald. “Braced for an impending apocalypse, they feel impelled to ensure that Canada assumes a unique, scripturally ordained role in the final days before the Second Coming — and little else.”

The Armageddon Factor shows how the religious right’s influence on the Harper government has led to hugely important but little-known changes in everything from foreign policy and the makeup of the courts to funding for scientific research and social welfare programs like daycare. And the book also shows that the religious influence is here to stay, regardless of which party ends up in government.

For those who thought the religious right in Canada was confined to rural areas and the west, this book is an eye-opener, outlining to what extent the corridors of power in Ottawa are now populated by true believers. For anyone who assumed that the American religious right stopped at the border, The Armageddon Factor explains how US money and evangelists have infiltrated Canadian politics.

This book should be essential reading for Canadians of every religious belief or political stripe. Indeed, The Armageddon Factor should persuade every Canadian that, with the growth of such a movement, the future direction of the country is at stake.
MARCI McDONALD is one of Canada's most respected journalists. The winner of eight gold National Magazine Awards, she is also the recipient of the Canadian Association of Journalists' investigative feature award. A former bureau chief for Maclean's in Paris and Washington, she has interviewed Ronald Reagan, George Bush and Bill Clinton, and spent five more years in the United States as a senior writer for US News & World Report. A winner of the Atkinson Fellowship in Public Policy, her study of the backstage machinations behind the free trade deal led to her book, Yankee Doodle Dandy: Brian Mulroney and the America Agenda. Her controversial cover story in the Walrus, "Stephen Harper and the TheoCons," inspired this book.