Amsterdam: A History of the World's Most Liberal City (Paperback) 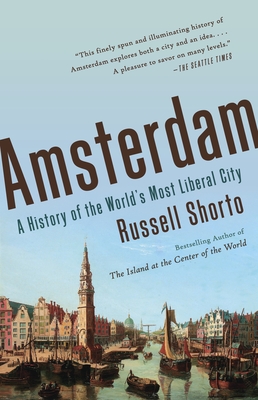 Amsterdam: A History of the World's Most Liberal City (Paperback)


Backordered
An endlessly entertaining portrait of the city of Amsterdam and the ideas that make it unique, by the author of the acclaimed Island at the Center of the World

But the deeper history of Amsterdam, what makes it one of the most fascinating places on earth, is bound up in its unique geography-the constant battle of its citizens to keep the sea at bay and the democratic philosophy that this enduring struggle fostered. Amsterdam is the font of liberalism, in both its senses. Tolerance for free thinking and free love make it a place where, in the words of one of its mayors, "craziness is a value." But the city also fostered the deeper meaning of liberalism, one that profoundly influenced America: political and economic freedom. Amsterdam was home not only to religious dissidents and radical thinkers but to the world's first great global corporation.

In this effortlessly erudite account, Russell Shorto traces the idiosyncratic evolution of Amsterdam, showing how such disparate elements as herring anatomy, naked Anabaptists parading through the streets, and an intimate gathering in a sixteenth-century wine-tasting room had a profound effect on Dutch-and world-history. Weaving in his own experiences of his adopted home, Shorto provides an ever-surprising, intellectually engaging story of Amsterdam.
Russell Shorto is the author of five books and is a contributing writer at the The New York Times Magazine. His books have been published in fourteen languages and have won numerous awards. From 2008 to 2013, he was the director of the John Adams Institute in Amsterdam.
“This finely spun and illuminating history of Amsterdam explores both a city and an idea. . . . A pleasure to savor on many levels.”
—The Seattle Times

“An absorbing history of a fascinating place.”
—Pittsburgh Post-Gazette

“[A] masterpiece.”
—The Daily Beast

“Engaging new history. . . . It brims with the sights, smells and sounds of a nearly thousand-year-old bustling, mercantile city. . . . Countless books have been written about Holland’s capital city. . . . [Shorto’s] contribution stands as a sparkling addition to the lot.”
—Associated Press

“Shorto’s brilliant follow-up to his previous book on Dutch Manhattan (The Island at the Center of the World) is an expertly told history of a city of new, shocking freedoms and the tough-minded people that developed them.”
—Publishers Weekly, starred review

“Insightful history. . . . Mr. Shorto masterfully describes how Amsterdam was built in only a few generations by reclaiming water from the sea, literally by hand in the 1600s. And he brings to life how the city attracted—with promises of freedom and tolerance—the most energetic people from all over Europe to create a free civic and economic society that became a model for the American Republic a century later.”
—Jeff Bewkes, CEO of Time Warner, The Wall Street Journal, Favorite Books of 2013

“Sometimes it’s clear from the off that a book is special, and that indefinable sense took hold quickly here. . . . An enthralling tale of radicalism and tolerance of strange and otherwise anathema beliefs and ideas.”
—Alex Crowley, Best Books of the Year, Publishers Weekly

“Masterful reporting, vivid history—the past and present are equally alive in this book.”
—James Gleick, author of The Information: A History, A Theory, A Flood

“Shorto is an excellent storyteller and rootler of strange facts, and Amsterdam should be issued as standard kit for anyone visiting the city.”
—The Guardian (UK)

“Russell Shorto writes engagingly about how a city can engender ideas—order, tolerance, comfort, egalitarianism, entrepreneurship—and in turn be shaped by them. Amsterdam argues convincingly that Western liberalism has been greatly influenced by this small, modest, crazy-yet-conventional place.”
—Witold Rybczynski, author of How Architecture Works: A Humanist’s Toolkit

“An often brilliant, and always enjoyable, investigation of liberalism’s Dutch roots. Shorto is once again revealed as a passionate and persuasive historian of culture and ideas.”
—Joseph O’Neill, author of Netherland

“Luminous. . . . An entertaining history full of deftly drawn characters and intoxicating ideas which have made Amsterdam the birthplace of liberalism in its many and shifting incarnations.”
—Katrina vanden Heuvel, Editor & Publisher, The Nation