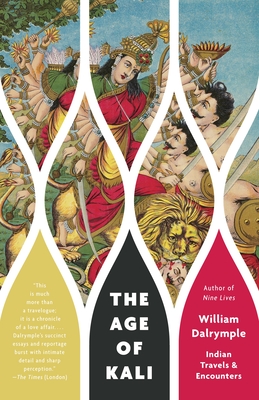 
Not On Our Shelves—Ships in 1-5 Days
From the author of The Last Mughal and Nine Lives: the classic stories he gathered during the ten years he spent journeying across the Indian subcontinent, from Sri Lanka and southern India to the North West Frontier of Pakistan. As he searched for evidence of Kali Yug, the “age of darkness” predicted by an ancient Hindu cosmology in a final epoch of strife and corruption, Dalrymple encountered a region that thrilled and surprised him. Venturing to places rarely visited by foreigners, he presents compelling portraits of a diverse range of figures—from a Hindi rap megastar through the Tamil Tigers to the drug lords of Pakistan. Dalrymple's love for the subcontinent comes across in every page, which makes its chronicles of political corruption, ethnic violence and social disintegration all the more poignant. The result is a dark yet vibrant travelogue, and a unique look at a region that continues to be marked by rapid change and unlimited possibilities as it struggles to reconcile the forces of modernity and tradition.
William Dalrymple is the author of seven acclaimed works of history and travel, including City of Djinns, which won the Young British Writer of the Year Prize and the Thomas Cook Travel Book award; the bestselling From the Holy Mountain; White Mughals, which won Britain's most prestigious history prize, the Wolfson; and The Last Mughal, which won the Duff Cooper Prize for History and Biography. He divides his time between New Delhi and London, and is a contributor to The New York Review of Books, The New Yorker, and The Guardian.

“This is much more than a travelogue; it is a chronicle of a love affair. . . . [Dalrymple’s] succinct essays and reportage burst with intimate detail and sharp perception.” —The Times (London)

“[Dalrymple is] the dazzling meteor of travel writing. Wide-ranging, eye-opening and deeply knowledgeable." —Independent on Sunday

“Witty and eagle-eyed, Dalrymple is, above everything, a fine observer and reporter." —Financial Times

“William Dalrymple may well be the greatest travel writer of his generation.” —The Spectator