The Theater of War: What Ancient Tragedies Can Teach Us Today (Paperback) 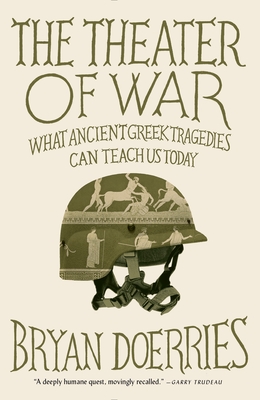 The Theater of War: What Ancient Tragedies Can Teach Us Today (Paperback)

For years theater director Bryan Doerries has been producing ancient Greek tragedies for a wide range of at-risk people in society. His is the personal and deeply passionate story of a life devoted to reclaiming the timeless power of an ancient artistic tradition to comfort the afflicted.

Doerries leads an innovative public health project—Theater of War—that produces ancient dramas for current and returned soldiers, people in recovery from alcohol and substance abuse, tornado and hurricane survivors, and more. Tracing a path that links the personal to the artistic to the social and back again, Doerries shows us how suffering and healing are part of a timeless process in which dialogue and empathy are inextricably linked.

The originality and generosity of Doerries’s work is startling, and The Theater of War—wholly unsentimental, but intensely felt and emotionally engaging—is a humane, knowledgeable, and accessible book that will both inspire and enlighten.

BRYAN DOERRIES is a New York-based writer, director, and translator who currently serves as Artistic Director of Theater of War Productions, a company that presents dramatic readings of seminal plays and texts to frame community conversations about pressing issues of public health and social justice. A self-described evangelist for ancient stories and their relevance to our lives today, Doerries uses age-old approaches to help individuals and communities heal from trauma and loss. He is the author of a memoir, The Theater of War: What Ancient Greek Tragedies Can Teach Us Today; All That You’ve Seen Here Is God, four plays by Aeschylus and Sophocles; and The Odyssey of Sergeant Jack Brennan, a graphic novelization of Homer’s Odyssey, told from the point of view of a US Marine returning home from Afghanistan. Among his awards, he has received an honorary Doctorate of Humane Letters from Kenyon College and was named Public Artist in Residence for the City of New York.

“Extraordinary. . . . Riveting. . . . [Doerries] discussed Ajax  with many troubled vets returning from Iraq and Afghanistan, and may have saved some of their lives. His book interweaves tales from this journey with episodes from Doerries’s own life and moving discussions of the plays he cherishes—his ‘blueprints for felt experience,’ his conduits for connection and compassion… it is through that intensity of focus, Doerries convinces us, that we can find permission to feel our own pain. To see his productions today, or to see Greek tragedy through his eyes, is to become measurably healthier and more human.” —James Romm, The Daily Beast

“The route Bryan Doerries describes in his memoir is as unique as the place it landed him. . . . Moving. . . . Mr. Doerries’s book loops around from autobiography to literary analysis to medical ethics and back again. . . . It should win him a host of new admirers.” —Abigail Zuger, The New York Times

“The theater of ancient Greece was many things. . . . [It is] the therapeutic potential of catharsis, that most interests Bryan Doerries. . . .  An impressive and accomplished journey.” —James Shapiro, The New York Times Book Review

“His compelling, raw book is both memoir and manifesto; he chronicles his own gradual discovery of the power and relevance of Greek tragedies while also championing their social utility. . . . Such insights capture something essential about Greek tragedy: Unlike contemporary theater, these works aspired to serve religious, political, and even therapeutic functions in ancient Greek society. . . . Across a gulf of two and a half millennia, the Greek tragedians can still help us know and cure ourselves.” — Nick Romeo, The Boston Globe

“This heart-gripping book is not merely one of the best theater books I’ve read this year; it’s one of the best books I’ve read this year. . . . An early tragedy inspired [Bryan Doerries] to found a company dedicated to bringing the ancients—specifically lesser-known Greek plays — to groups experiencing trauma of some kind. . . . The results, as he recounts in fluent, agile prose, upheld his belief that communal exposure to the power of the Greek tragedies can be a profoundly useful healing tool.” —Charles Isherwood, The New York Times

“Doerries is well educated in the classics and in human suffering, which has opened his eyes to the therapeutic potential of art. He describes his father's slow descent into madness from diabetes and how, at the end of his life, he thought he was being watched over by black crows—persecuting Furies who had come to carry out his fate, largely the result of his own life choices. Doerries likewise describes the slow death of his girlfriend from cystic fibrosis, which was preceded by a double lung transplant, bacterial infections, and the ultimate rejection of the donor organs by her body. He saw from these trials that there is a universal, timeless element to suffering, the psychological dimension of which can be alleviated through drama.” —Blake Seitz, The Weekly Standard

“Doerries’ account of his performances with Theater of War is at once an impassioned history lesson, a manual of therapy for the afflicted and a deep analysis of the power of ancient Greek tragedy.” —Arlice Davenport, The Wichita Eagle

“Important and illuminating. . . . This is an admirable book about an admirable project.” —Andrew J. Bacevich, The American Scholar

“The Theater of War is an enthralling, gracefully written, and urgently important examination of the vital, ongoing relationship between past and present, between story and human experience, and between what the ancients had to report about warfare and human values and the desperate moral and psychological struggles that soldiers still undergo today.  Bryan Doerries has given us a gift to be treasured.”  —Tim O’Brien

“Bryan Doerries's The Theater of War is a testament both to the enduring power of the classics and to the vital role art can play in our communal understanding of war and suffering.”  —Phil Klay, author of Redeployment, recipient of 2014 National Book Award

“One has the feeling we are being watched by our ancestors, that they continually call out to us, bestow us with gifts of their wisdom, warn us about habitual traps and foibles common to all humans. We rarely have the presence to listen to, to receive that wisdom. Bryan Doerries asks: what lessons will we finally take to heart from these ancients? In this riveting narrative, simply but elegantly told, Doerries movingly resurrects the inner life of a people who lived 2,500 years ago, but whose struggles evoke our own familiar and damaged present, now endowed by this wonderful book with more drama, more tragedy, more compassion, more possibility. Here is the proof at last: our future depends on the gifts of the past.”  —Ken Burns

“Bryan Doerries’s ongoing staging of Greek tragedies before U.S. military personnel and others processing trauma is an act of courageous humanism: a tribute to vanished lives and a succor to current soldiers and citizens.  In connecting the valiance and pathos of modern military life to a 2500-year tradition, Doerries has returned dignity to countless troops nearly destroyed by war.  His capacious yet intimate book offers a privileged look into not only the psychological costs of the Iraq and Afghanistan conflicts and other proximate disasters, but also the larger meaning of inhabiting an unpredictable and militarized world.” —Andrew Solomon, author of Far From The Tree

“I have always thought of Greek tragedies as the earliest public service announcements. Those ancient stories of family politics, their warnings about civic duty, and their parables of grief and its management are as vital today as when first written. Through his translations and public readings, and now this powerful book, Doerries offers modern audiences access to these ancient PSAs. We hunger and thirst for the guidance these plays contain.” —Frances McDormand

“A deeply humane quest, movingly recalled. Doerries’s passionate search for meaning in ancient text has led him out of the dusty stacks of scholarship into an arena of ecstatic public engagement. He has taken his elegantly reasoned thesis – that the main business of tragedy has always been catharsis – and created a theatrical experience that has lifted countless audiences out of isolation and into profound community.”  —Garry Trudeau

“This book illuminates how Greek tragedy penetrates to the deepest of levels in us all. It also shows how certain audiences, when given permission, can help illuminate the urgency and relevance of these ancient stories today. In his approach to tragedy, Doerries has found the way to remove out-of-date barriers and clean the outer crust of language with fresh words so that the essential can appear once more.” —Peter Brook