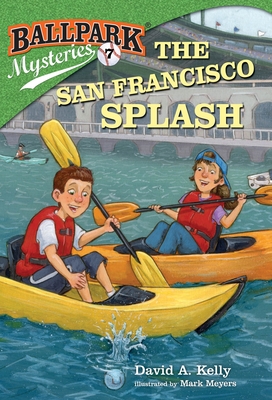 This is book number 7 in the Ballpark Mysteries series.

Time for a seventh-inning stretch! The San Francisco Splash is book #7 in our early chapter book mystery series, where each book is set in a different American ballpark!

Splash! A hit soars over the walls of the San Francisco ballpark on the bay and drops into the water. But then Mike and Kate hear another, much larger splash nearby . . . and this time it's not a baseball. It's a man overboard! And when he's pulled from the water, the old-time ballplayer discovers his World Series ring is gone! Is it at the bottom of the bay? Or was it somehow stolen by a long-ago rival?

Cross Ron Roy's A to Z Mystery series with Matt Christopher's sports books and you get the Ballpark Mysteries: fun, puzzling whodunits aimed at the younger brothers and sisters of John Feinstein's fans.
DAVID A. KELLY has written for many newspapers and magazines, and Babe Ruth and the Baseball Curse, published in spring 2009, was his first book for children. He lives 15 minutes from Fenway Park in Newton, Massachusetts.