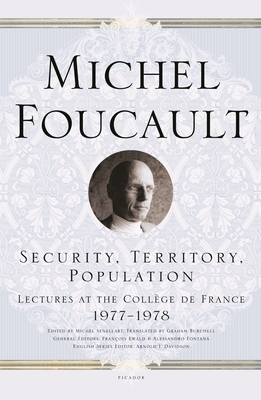 Marking a major development in Michel Foucault's thinking, Security, Territory, Population takes as its starting point the notion of "biopower," studying the foundations of this new technology of power over populations.

Distinct from punitive disciplinary systems, the mechanisms of power are here finely entwined with the technologies of security. In this volume, though, Foucault begins to turn his attention to the history of "governmentality," from the first centuries of the Christian era to the emergence of the modern nation state--shifting the center of gravity of the lectures from the question of biopower to that of government. In light of Foucault's later work, these lectures illustrate a radical turning point at which the transition to the problematic of the "government of self and others" would begin.

“Foucault must be reckoned with by humanists, social scientists, and political activists.” —The New York Times Book Review

“Foucault has an alert and sensitive mind that can ignore the familiar surfaces of established intellectual codes and ask new questions.... [He] gives dramatic quality to the movement of culture.” —The New York Review of Books

“Foucault is quite central to our sense of where we are. . . . [He carries] out, in the noblest way, the promiscuous aim of true culture.” —The Nation