The Pilgrimage Road to Santiago: The Complete Cultural Handbook (Paperback) 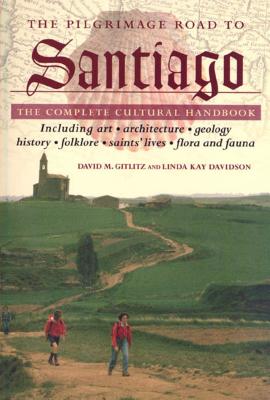 The Pilgrimage Road to Santiago: The Complete Cultural Handbook (Paperback)

The road across northern Spain to Santiago de Compostela in the northwest was one of the three major Christian pilgrimage routes during the Middle Ages, leading pilgrims to the resting place of the Apostle St. James. Today, the system of trails and roads that made up the old pilgrimage route is the most popular long-distance trail in Europe, winding from the heights of the Pyrenees to the gently rolling fields and woods of Galicia. Hundreds of thousands of modern-day pilgrims, art lovers, historians, and adventurers retrace the road today, traveling through a stunningly varied landscape which contains some of the most extraordinary art and architecture in the western world. For any visitor, the Road to Santiago is a treasure trove of historical sites, rustic Spanish villages, churches and cathedrals, and religious art.

To fully appreciate the riches of this unique route, look no further than The Pilgrimage Road to Santiago, a fascinating step-by-step guide to the cultural history of the Road for pilgrims, hikers, and armchair travelers alike. Organized geographically, the book covers aspects of the terrain, places of interest, history, artistic monuments, and each town and village's historical relationship to the pilgrimage.

The authors have led five student treks along the Road, studying the art, architecture, and cultural sites of the pilgrimage road from southern France to Compostela. Their lectures, based on twenty-five years of pilgrimage scholarship and fieldwork, were the starting point for this handbook.

David Gitlitz and Linda Kay Davidson are professors at the University of Rhode Island. Each has written several books on Spanish culture, including Gitlitz's Secrecy and Deceit, an alternate selection of the History Book Club and winner of the 1996 National Jewish Book Award for Sephardic Studies and the 1997 Lucy B. Dawidowicz Prize for History. They are married and A Drizzle of Honey is the first book they have written together. They are also the authors of The Pilgrimage Road to Santiago.

Linda Kay Davidson and David Gitlitz are professors at the University of Rhode Island. Each has written several books on Spanish culture. They are married and this is the first book they have written together.