The Coldest War: A Memoir of Korea (Paperback) 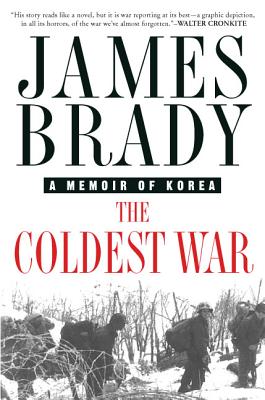 The Coldest War: A Memoir of Korea (Paperback)

James Brady's The Coldest War is a powerful and moving memoir of the Korean War.

America's "forgotten war" lasted just thirty-seven months, yet 54,246 Americans died in that time -- nearly as many as died in ten years in Vietnam. On the fiftieth anniversary of this devastating conflict, James Brady tells the story of his life as a young marine lieutenant in Korea.

In 1947, seeking to avoid the draft, nineteen-year-old Jim Brady volunteered for a Marine Corps program that made him a lieutenant in the reserves on the day he graduated college. He didn't plan to find himself in command of a rifle platoon three years later facing a real enemy, but that is exactly what happened after the Chinese turned a so-called police action into a war.

The Coldest War vividly describes Brady's rapid education in the realities of war and the pressures of command. Opportunities for bold offensives sink in the miasma of trench warfare; death comes in fits and starts as too-accurate artillery on both sides seeks out men in their bunkers; constant alertness is crucial for survival, while brutal cold and a seductive silence conspire to lull soldiers into an often fatal stupor.

The Korean War affected the lives of all Americans, yet is little known beyond the antics of "M*A*S*H." Here is the inside story that deserves to be told, and James Brady is a powerful witness to a vital chapter of our history.

James Brady commanded a rifle platoon during the Korean War and was awarded the Bronze Star for valor. He captured these experiences in his books The Scariest Place in the World, The Marine, his New York Times bestselling novels Warning of War and The Marines of Autumn, and in his highly praised memoir The Coldest War. His weekly columns for Parade magazine and Forbes.com were considered must-reads by millions. He lived in Manhattan and East Hampton, New York.

“War reporting at its best - a graphic depiction, in all its horror, of the war we've almost forgotten... Jim Brady has used his finely honed reportorial skills to record his own front-line experiences in the Korean War. His story reads like a novel.” —Walter Cronkite

“A marvelous memoir. A sensitive and superbly written narrative that eventually explodes off the pages like a grenade in the gut... Taut, tight, and telling. Jim Brady proves again that he is one of the most underrated writers in American books.” —Dan Rather

“It is about time somebody wrote about the personal side of the Korean War - the forgotten war. It is a gripping and honest book. Everyone prone to think simply about war should read it.” —Jim Lehrer