The Death of the West: How Dying Populations and Immigrant Invasions Imperil Our Country and Civilization (Paperback) 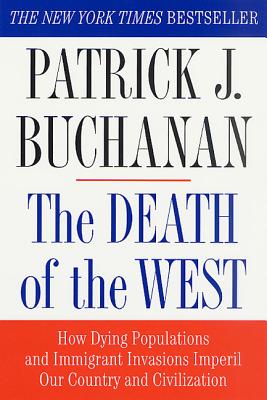 The Death of the West: How Dying Populations and Immigrant Invasions Imperil Our Country and Civilization (Paperback)

The national bestseller that shocked the nation--The Death of the West is an unflinching look at the increasing decline in Western culture and power.

The West is dying. Collapsing birth rates in Europe and the U. S., coupled with population explosions in Africa, Asia and Latin America are set to cause cataclysmic shifts in world power, as unchecked immigration swamps and polarizes every Western society and nation.
The Death of the West details how a civilization, culture, and moral order are passing away and foresees a new world order that has terrifying implications for our freedom, our faith, and the preeminence of American democracy.

The Death of the West is a timely, provocative study that asks the question that quietly troubles millions: Is the America we grew up in gone forever?

Patrick J. Buchanan was a senior advisor to three American Presidents, ran twice for the Republican nomination in 1992 and 1996, and was the Reform Party’s Presidential candidate in 2000. The author of seven books, Mr. Buchanan is a syndicated columnist and a political analyst for MSNBC. He is also Editor Emeritus of the political magazine, The American Conservative. He lives in McLean, Virginia.

“Buchanan is an honest writer who opens his mind and psyche in a way few people can...He minces nothing except an occasional opponent.” —The Philadelphia Inquirer