A Smile as Big as the Moon: A Special Education Teacher, His Class, and Their Inspiring Journey Through U.S. Space Camp (Paperback) 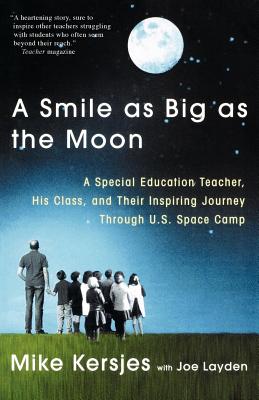 A Smile as Big as the Moon: A Special Education Teacher, His Class, and Their Inspiring Journey Through U.S. Space Camp (Paperback)

By Mike Kersjes, Joe Layden (With)

One autumn Kersjes got the outlandish idea that his students would benefit from going to Space Camp, where, in conjunction with NASA, high school students compete in a variety of activities similar to those experienced by astronauts in training for space shuttle missions. There was only one problem: this program had been specifically designed for gifted and talented students, the best and the brightest from America's most privileged high schools.

Kersjes believed that, given a chance, his kids could do as well as anybody, and with remarkable persistence broke down one barrier after another, from his own principal's office to the inner sanctum of NASA, until Space Camp opened its doors, on an experimental basis, to special ed students. After nine months of rigorous preparation, during which the class molded itself into a working team, they arrived at Space Camp, where they turned in a performance so startling, so surprising, that it will leave the reader breathless. A truly triumphant story of the power of the human spirit.

Mike Kersjes is president of Space Is Special Inc., a not for profit organization that helps special education students enhance their science and mathematics skills using space as a motivational theme. He has been a special education teacher and football coach for more than twenty years with the Forest Hills Public School system and is currently working with NASA Marshall Space Flight Center and the University of California, Irvine. The film rights for his book have been sold to Jerry Bruckheimer for Walt Disney Pictures. Kersjes lives in Grand Rapids, Michigan.

Mr. Layden has written or co-written more than thirty books for adults and children, including The Last Great Fight and The Ghost Horse.

“It's a heartening story, sure to inspire other teachers struggling with students who often seem beyond their reach . . . Dramatic and moving . . . The students end up winning a major award, but their real victory, of course, is their newfound confidence and sense of accomplishment.” —Teacher magazine

“Genuinely inspirational . . . McKinney and Kersjes witnessed a remarkable transformation: kids who were plagued by numerous, often severe emotional, familial, and learning problems became a cohesive team that placed in the top three in all three of the camp's competitions . . . A remarkable story.” —Booklist

“Like the U.S. Space Program, this is a compelling story that shows what can be accomplished when you are only limited by imagination and ingenuity. The reader can readily sense the personal dedication and love that 'Coach' has for his students.” —Bob Springer, astronaut

“It's hard not to fall under the spell of this Michigan-based David-and-Goliath tale.” —The Detroit Free Press

“A testament to how perseverance can get results and how children can perform surprising feats in a system that doesn't always work to help all children.” —The Pittsburgh Post-Gazette

“A Smile as Big as the Moon is a terrific book. At once uplifting and thought provoking, it pulls no punches in depicting the hardships encountered by a group of special education students and the teacher who believed in them. A remarkable and unforgettable story.” —Jerry Bruckheimer

“An inspiration.” —The Roanoke Times

“Heartfelt . . . moving, reveling in the students' strength and quirks, never blinking at their untimely failures.” —The Anniston Star

“Those of us who have witnessed Mike's wonderful work are very happy that they are evident and celebrated in this great book.” —Tom Rooney, president of Team Lemieux, LLC

“Shoot for the moon--and land among the stars . . . Mike Kersjes has done that in his book.” —Captain Gene Cernan, Apollo XVII