Gettysburg: A Novel of the Civil War (The Gettysburg Trilogy #1) (Paperback) 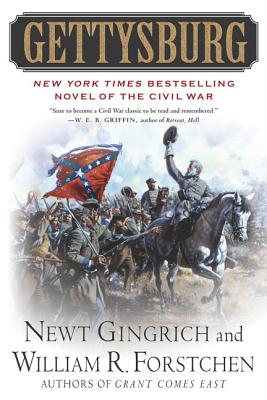 Gettysburg: A Novel of the Civil War (The Gettysburg Trilogy #1) (Paperback)

This is book number 1 in the The Gettysburg Trilogy series.

The Civil War is the American Iliad. Lincoln, Stonewall Jackson, Grant, and Lee still stand as heroic ideals, as stirring to our national memory as were the legendary Achilles and Hector to the world of the ancient Greeks. Within the story of our Iliad one battle stands forth above all others: Gettysburg.

Millions visit Gettysburg each year to walk the fields and hills where Joshua Chamberlain made his legendary stand and Pickett went down to a defeat which doomed a nation, but in defeat forever became a symbol of the heroic Lost Cause. As the years passed, and the scars healed, the debate, rather than drifting away has intensified. It is the battle which has become the great "what if," of American history and the center of a dreamscape where Confederate banners finally do crown the heights above the town.

The year is 1863, and General Robert E. Lee and his Army of Northern Virginia are poised to attack the North and claim the victory that would end the brutal conflict. But Lee's Gettysburg campaign ended in failure, ultimately deciding the outcome of the war.

Launching his men into a vast sweeping operation, of which the town of Gettysburg is but one small part of the plan, General Lee, acting as he did at Chancellorsville, Second Manassas, and Antietam, displays the audacity of old. He knows he has but one more good chance to gain ultimate victory, for after two years of war the relentless power of an industrialized north is wearing the South down. Lee's lieutenants and the men in the ranks, imbued with this renewed spirit of the offensive embark on the Gettysburg Campaign that many dream "should have been." The soldiers in the line, Yank and Reb, knew as well that this would be the great challenge, the decisive moment that would decided whether a nation would die, or be created, and both sides were ready, willing to lay down their lives for their Cause.

An action-packed and painstakingly researched masterwork by Newt Gingrich and William Forstchen, Gettysburg stands as the first book in a series to tell the story of how history could have unfolded, how a victory for Lee would have changed the destiny of the nation forever. This is a novel of true heroism and glory in America's most trying hour.

“Two respected historians, one horrific battle - and the challenging question of "what if...?' Sure to become a Civil War classic to be read and remembered.” —W.E.B. Griffin, author of Final Justice

“Gettysburg is a creative, clever, and fascinating 'what if?' novel that promises to excite and entertain America's legions of Civil War buffs.” —James Carville

“As historical fiction this stands beside The Killer Angels. As an alternative history of Gettysburg, it stands alone. The mastery of operational history enables the authors to expand the story's scope. The larger-scale, more fluid battle of Gettysburg described is internally consistent, a logical consequence of the novel's challenging major premise. The narrative is so clear that the action can be followed without maps. And the characters are sometimes heartbreakingly true to their historical originals.” —Dennis Showalter, former president of the Society of Military Historians

“The novel Gettysburg puts forth a highly plausible and exciting scenario of a Confederate victory in the Pennsylvania campaign of 1863. The authors exhibit an in-depth knowledge of not only technical details, but also the various personalities of the leaders and how they could have reacted had things gone quite differently from history as we know it.” —Don Troiani, noted Civil War artist