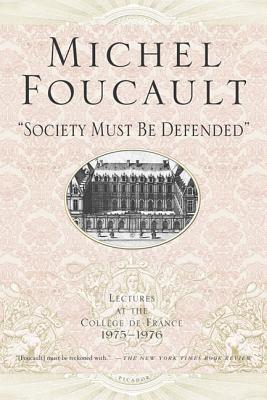 An examination of the relation between war and politics, by one of the twentieth century's most influential thinkers

From 1971 until 1984 at the Collège de France, Michel Foucault gave a series of lectures ranging freely and conversationally over the range of his research. In Society Must Be Defended, Foucault deals with the emergence in the early seventeenth century of a new understanding of war as the permanent basis of all institutions of power, a hidden presence within society that could be deciphered by an historical analysis. Tracing this development, Foucault outlines the genealogy of power and knowledge that had become his dominant concern.

“Foucault is quite central to our sense of where we are. . . [He] is carrying out, in the noblest way, the promiscuous aim of true culture.” —The Nation

“[Foucault] has an alert and sensitive mind which can ignore the familiar surfaces of established intellectual codes and ask new questions. . ..[He] gives dramatic quality to the movement of culture.” —The New York Review of Books