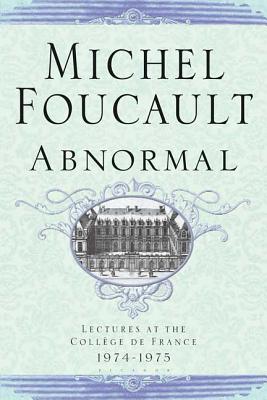 From 1971 until his death in 1984, Foucault gave public lectures at the world-famous College de France. Attended by thousands, these were seminal events in the world of French letters. Picador is proud to be publishing the lectures in thirteen volumes.

The lectures comprising Abnormal begin by examining the role of psychiatry in modern criminal justice, and its method of categorizing individuals who "resemble their crime before they commit it." Building on the themes of societal self-defense in "Society Must Be Defended," Foucault shows how and why defining "abnormality" and "normality" were prerogatives of power in the nineteenth century.

The College de France lectures add immeasurably to our appreciation of Foucault's work and offer a unique window into his thinking.

“These lectures offer important insights into the evolution of the primary focus of Foucault's later work -- the relationship between power and knowledge.” —Library Journal

“The importance of these lectures is that they are directly connected with two of Foucault's greatest books, Discipline and Punish and The History of Sexuality: An Introduction. Because they are clear and to the point, the lectures throw considerable light on the more difficult ideas and passages of their related published works.” —The Stranger