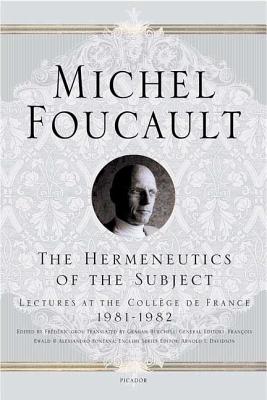 The Hermeneutics of the Subject is the third volume in the collection of Michel Foucault's lectures at the Collège de France, where faculty give public lectures on any topic of their choosing. Attended by thousands, Foucault's lectures were seminal events in the world of French letters, and his ideas expressed there remain benchmarks of contemporary critical inquiry.

Foucault's wide-ranging lectures at this school, delivered throughout the 1970s and early 1980s, clearly influenced his groundbreaking books, especially The History of Sexuality and Discipline and Punish. In the lectures comprising this volume, Foucault focuses on how the "self" and the "care of the self" were conceived during the period of antiquity, beginning with Socrates. The problems of the ethical formation of the self, Foucault argues, form the background for our own questions about subjectivity and remain at the center of contemporary moral thought.

This series of lectures continues to throw new light on Foucault's final works, and shows the full depth of his engagement with ancient thought. Lucid and provocative, The Hermeneutics of the Subject reveals Foucault at the height of his powers.

“A contribution to modern thought so enormous that philosophy cannot be approached without reference to his works.” —Library Journal

“Foucault is quite central to our sense of where we are. . . . [His work carries] out, in the noblest way, the promiscuous aim of true culture.” —The Nation