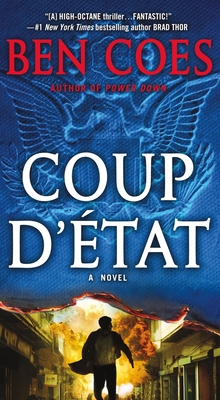 This is book number 2 in the A Dewey Andreas Novel series.

When a fragile peace breaks down between Pakistan and India, the United States is forced to intervene. When a rapidly escalating war threatens to engulf the entire region, the president must find a way to shut it down immediately—or else face total destruction for the world at large.

With the clock ticking and Pakistan in the hands of a religious radical willing to do anything and risk everything to achieve his deadly plan, there is only one man with the skills and experience to infiltrate the live war theater and successfully execute a nearly impossible, unbelievably daring plan. His name: Dewey Andreas. His mission: to remove the Pakistani president from power. Now all the White House has to do is find him…before time runs out.

“This exciting sequel to Power Down explores an all-too-plausible conflict…the plot sizzles with action, and the details have an authentic ring that put this thriller a cut above the pack.” —Publishers Weekly

“Will keep you up at night--first with the titillation of a great read, then with dread that Ben's plot might not be all that imaginary. A sumptuous dessert for a thriller reader.” —Brian Haig, author of The Capitol Game