The Darkest Night: Two Sisters, a Brutal Murder, and the Loss of Innocence in a Small Town (Mass Market) 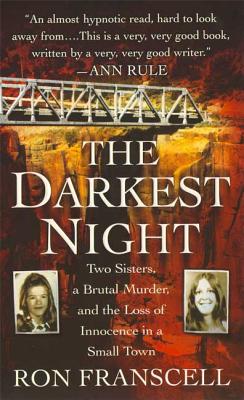 The Darkest Night: Two Sisters, a Brutal Murder, and the Loss of Innocence in a Small Town (Mass Market)

Casper, Wyoming:1973. Eleven-year-old Amy Burridge rides with her eighteen-year-old sister, Becky, to the grocery store. When they finish their shopping, Becky's car gets a flat tire. Two men politely offer them a ride home. But they were anything but Good Samaritans. The girls would suffer unspeakable crimes at the hands of these men before being thrown from a bridge into the North Platte River. One miraculously survived. The other did not.

Years later, author and journalist Ron Franscell—who lived in Casper at the time of the crime, and was a friend to Amy and Becky—can't forget Wyoming's most shocking story of abduction, rape, and murder. Neither could Becky, the surviving sister. The two men who violated her and Amy were sentenced to life in prison, but the demons of her past kept haunting Becky…until she met her fate years later at the same bridge where she'd lost her sister.

Ron Franscell is a journalist whose work regularly appears in publications such as the Washington Post, Chicago Sun-Times, San Francisco Chronicle, Denver Post, San Jose Mercury-News, St. Louis Post-Dispatch, and Milwaukee Journal-Sentinel. He is also a novelist, whose books include Angel Fire and The Deadline. He grew up in Wyoming and currently lives in Texas.

“This uncommon story has every chilling component of human terror, drama and suspense that readers of true crime look for… I highly recommend this engaging book.” —Vincent Bugliosi, #1 New York Times bestselling author of Helter Skelter

“It will haunt you long after you've read it. A remarkable achievement.” —C.J. BOX, bestselling author of Free Fire and Blue Heaven and Wyoming native

“Stand[s] out from the legion of true-crime books. The author here was an affected bystander, not a neutral observer... In the end, [The Darkest Night] is too horrifying to try to explain.” —Denver Post