Gerald R. Ford: A Bibliography (Bibliographies of the Presidents of the United States) (Hardcover) 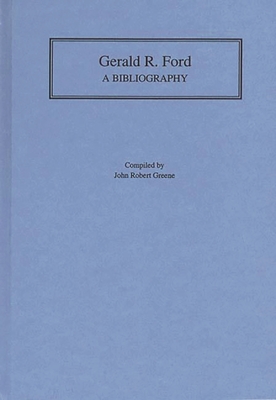 Gerald R. Ford: A Bibliography (Bibliographies of the Presidents of the United States) (Hardcover)

The only full bibliography on the Ford years, this volume offers a complete compilation of material pertaining to the life and political career of Gerald R. Ford. The documents included trace Ford's growth from his early days as a child in Grand Rapids, through his naval service in World War II, his 1948 election to Congress and 1965 selection as Republican Minority Leader, to his 1973 nomination and selection as Richard Nixon's vice-president and his 1974 accession to the presidency. The work contains over 350 references to manuscript material on the Ford years, as well as monograph, journal article, and memoir sources, including the first full listing of Ford's own writings available in print. Oral histories, historiographical materials, iconography, and other audiovisual materials are also included.

The bibliography is a particularly broad-based one, including short essays on the audiovisual and iconographic material available and a wide range of entries on available archival material. All the archival material presently available at the Gerald R. Ford Library is included. Most of the entries include a short annotation. The volume also provides an extensive chronology of the Ford years.

JOHN ROBERT GREENE is Professor of History and Communication at Cazenovia College. He is the author of The Crusade: The Presidential Election of 1952 (1985), The Limits of Power: The Nixon and Ford Administrations (1992), and the forthcoming The Presidency of Gerald R. Ford (1995).