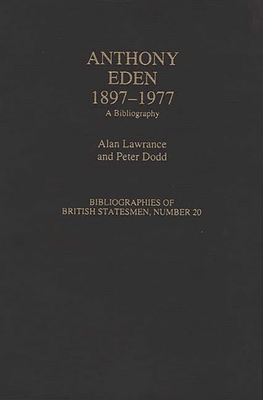 This book is the first full-length bibliography of Anthony Eden, who was British Foreign Secretary in the 1930s and negotiated with dictators Hitler, Mussolini, and Stalin. He resigned in 1938, gaining a worldwide reputation as an opponent of appeasement, and later played a key role in the British wartime Cabinet under Churchill and as Foreign Secretary in the Conservative government of 1951-1955. His brief period as Prime Minister, 1955-1957, ended soon after his controversial handling of the Suez Crisis in 1956. This comprehensive bibliography cites a wide range of sources, including contemporary periodicals, and is carefully annotated.

This work brings attention to conflicting interpretations of events and differing assessments of Eden. Important aspects of Eden's career are covered including the precise reasons for his resignation in 1938, his relationship with Churchill, his disagreements with both Roosevelt and Dulles, and his chairmanship of the 1954 Geneva Conference on Indochina. The volume includes a separate section on the Suez Crisis, including the diverse views of all the participants and comments on Eden's role. In addition, the work provides a detailed chronology and an informative summary biography.

ALAN LAWRANCE is principal lecturer in Modern History at the University of Hertfordshire in England. He is the author of China's Foreign Relations Since 1949 (1975) and Mao Zedong: A Bibliography (Greenwood, 1991).PETER DODD recently retired as Headmaster of Calday Grange School, Cheshire, England. He is an historian with a special interest in modern British history.