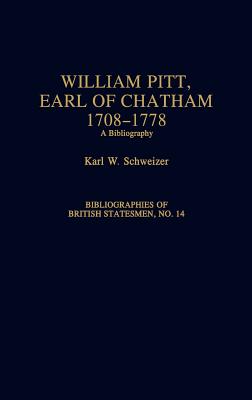 William Pitt the elder was a complex, controversial, and ambiguous statesman, an enigma to contemporaries and historians alike. Although he was acclaimed in his own lifetime as a great war leader, revisionist scholarship in the past two decades has suggested that his contribution to British success has been exaggerated. This in-depth, annotated bibliography provides a valuable guide to this complex statesman. The work begins with a short biography of Pitt and a chronology of his life, and then provides exhaustive coverage of both primary and secondary sources. Chapters include a survey of manuscript sources, coverage of relevant newspaper articles, historiographical materials, and an extensive compendium of historical and biographical works on Pitt, his achievements, and his place in history. The work is fully indexed.

KARL W. SCHWEIZER is Professor of History at the New Jersey Institute of Technology. He is the author of many books and articles, including most recently, England, Prussia, and the Seven Years War (1989) and Cobbett in His Times (1990). Dr. Schweizer is also a Fellow of the British Royal Historical Society.